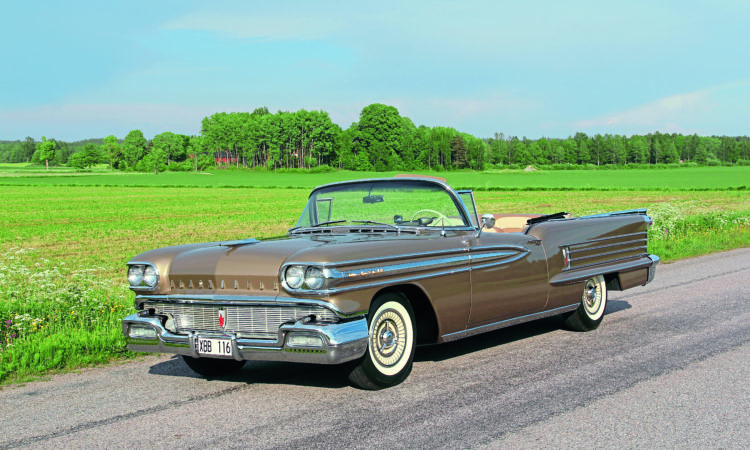 When you’ve spent 16 years returning one 1958 Oldsmobile to the road, what do you do for an encore? Have yourself one more, that’s what…

Choice – or a lack of it – has a big effect on the cars we end up owning. Tomas Karlsson of Lyrestad in Sweden found his options severely restricted when he went looking for a 1958 Oldsmobile 98 convertible. They were always uncommon by American standards, though not exactly rare, with 5605 of them sold at a $4200 base price, more than any of the other Olds 98 models.

But that spectacular styling dated fast and the big 371cu in V8 sucked through a generous Quadra-jet carb, making for a thirst that seemed alarming by the time the oil crisis struck in the early Seventies. A great many were taken off the road and scrapped, dumped or just parked.

So where did Tomas find this beautiful example? Well… it wasn’t beautiful when he found it. It had made its exit from daily life even before the oil crisis, suffering an accident somewhere in Tennessee. When Tomas heard of it in 2004, it was in Texas, and the long years of storage had allowed the rust bug to take hold too. Not a very enticing prospect as a restoration candidate, but this is where the problem of choice came into it.

There are never many for sale, and Tomas didn’t have a giant pile of money – he had recently put a lot into a 16-year restoration of a 1958 Olds 98 coupe, one that he finished to such a high standard that it collected prizes everywhere it went and even won him a trip to the US in 2003.

“The following year, a friend called and told me about the convertible,” says Tomas. “It was in need of total restoration, but a Super 88 four-door from the same year was also included in the deal.” If that sounds more promising, it didn’t look that way when Tomas saw some pictures: “There was a lot of rust in the body and on top of that there was the accident damage,” he says.

But it was a convertible, and Tomas certainly knew his way around a 1958 Oldsmobile by this time, so there was nothing to frighten him off. During the spring of 2005 it was shipped to Sweden.

On arrival Tomas realised it would be a long, long time before this particular Olds returned to the road. The storage conditions had clearly been pretty dismal, with enough rainfall to rot out much of the floor and other lower areas. Worse still, every nut and bolt seemed to be corroded and Tomas had to resort to cutting them off. When it was time to start on the shell repairs, he took the only sensible tactic for such a weakened structure – keep the body on the frame until it had its strength back.

“I welded some bracing bars inside the body to keep it from bending since most of the floor was rusted away,” he says.

“After that there was a lot of welding to get a new floor in place, plus other lower parts like the sills replaced with new metal.” Tomas did most of the bodywork himself but called on an extra-skilful friend to assist with the most challenging tasks, like cutting off the rear section of the trunk and welding in a new section from a donor car. When the body was stable again, the bracing bars inside were cut out and the body could finally be taken off the frame.

This revealed the damage caused by that accident back in 1967 – the car suffered enough of an impact to move one of the chassis rails slightly. With this corrected, the chassis went for sandblasting which revealed only a little corrosion damage to deal with. Finally, a coat of tough black paint went on for protection. When Tomas turned his attention to the engine and transmission, the value of the donor car really came into its own. Both the mill and the Hydra-Matic transmission were beyond help – not worth even attempting a rebuild. But the same 371cu in V8 was used in the 88 model, differing only in carburettor and intake manifold, so the four-door donor’s driveline would be a perfect substitute.

“To be sure it was okay, I totally dismantled both the engine and the transmission and replaced everything that needed to be replaced, so it all got a complete rebuild,” says Tomas.

One part of the driveline that did survive was the rear axle, though both it and the front clip needed significant cleaning and replacement of all the usual bushes, bearings and seals. The brakes, as you might expect, were only fit for the skip and were replaced with new parts. Tomas took a clever approach to preserving the work he’d done to the body.

With at least a year of chassis and mechanical work to get through after the separation of repaired shell and frame, the body was given a final fettle and painted yellow to protect it for a 12-month stay in a warm garage. This gave Tomas a chance to inspect it and make any final adjustments with a fresh eye before the final coat of Champagne Mist gold metallic was applied.

Devil’s in the detail

Tomas spent a great deal of time sourcing correct new oldstock (NOS) parts for the Olds, ideally still in their original boxes. Indeed, he’s developed a reputation for finding these desirable pieces among fellow fans in Sweden, and he’s been able to sell on a few items to other car guys. The time taken in trawling through eBay listings or other online sources is one most restorers never reckon with, but the hours are significant. Tomas also made several trips to the US to hunt down parts, locating a carpet in the correct colour for the car’s original paint, as mentioned above.

“That was in 2006,” he says, “and it’s lucky I bought it then, because it’s no longer produced.” Olds 98 buyers could choose from interiors made in a wide variety of cloth, vinyl and coloured leather, and this car’s hide interior was expertly recreated by a Swedish trimmer. The stamped shapes in the leather have been recrafted to perfection. There’s a heck of a lot of it – not just the two large seats but the door cards and mouldings either side of the rear set too.

The dash top is also a new creation. There’s a company in Sweden called RD Autoline that can make new one-piece coverings for a number of Fifties American cars, vacuumforming the right shade and texture of vinyl over the original metal. Tomas’s skill at locating NOS parts was put to the test by the need to source replacements for every single bit of glass, but the big convertible now wears a full set – each with the correct stamp on it, of course.

A look at the pictures of the car pre-restoration gives a clear idea of the sheer amount of detail and complexity involved in finishing this build to concours standard. Everywhere you look there are bits of brightwork to renew or replate, buttons, rubbers, grommets and boots to source, trim pieces held on with visible screws that must be of the right shape and finish, not to mention the many gizmos that arrived with this luxurious, heavily-optioned car when new – plus a few others Tomas has added.

“It had power-windows and a four-way power seat as standard,” says Tomas, “and this car now has a six-way power seat. I also put an Autronic Eye on the dash. Close to it is a glass prism that was another optional extra; it made it easier to see the traffic lights that were often hanging high above American streets.”

Other goodies include a radio that can removed from the car – the so called ‘trans-portable radio’ with a helpful pun to remind you it’s a transistor set and not a steaming great valve-driven unit that would need its own suitcase battery. An Oldsmobile expert could walk round the car and find dozens of other touches that make this car uniquely well-equipped – it would have been a salesman’s dream to issue the invoice on this baby.

Tomas’s exceptionally high standards (and his temptation to add every rare extra he can find!) stretched out an already lengthy build process to the summer of 2016, when the car passed its Swedish inspection and began collecting trophies, culminating in a Best In Show award at the 2017 Power Big Meet.

A crowning achievement? Will Tomas stop, now that he has both closed and open ’58 Oldsmobiles? Of course not. Last year he bought a 1958 Oldsmobile Fiesta station wagon, this time not nearly such a wreck, but still in need of restoration. So if you want to see the best ’58 Olds wagon in the world, you’ve probably only got about 10 years to wait. Then we’ll have three for the road.

There’s lots more restoration stories and features in the monthly Classic American magazine. Take a look at the current issue or if you’re already enjoying it, let’s get a subscription rolling so you can see what’s inside every issue, every month.