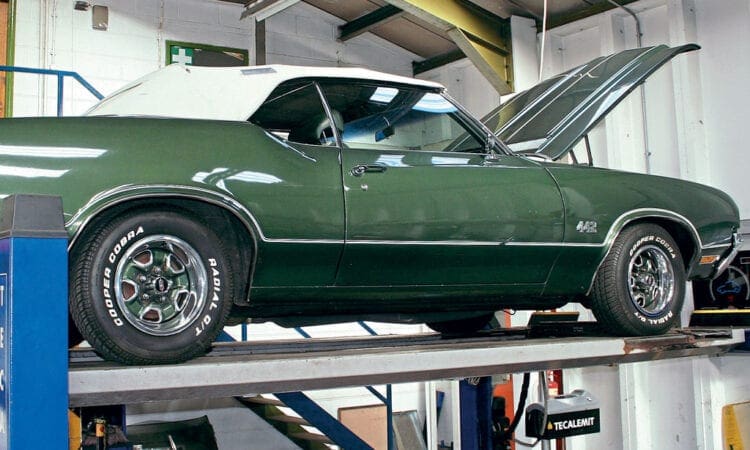 Classic American editor Ben Klemenzson takes a very personal stance about an issue that’s been a hot topic of conversation over the past year: the exemption for vehicles over 40 years old from the MoT.

I’m sure like a lot of people, when the Department of Transport announced that all vehicles over 40 years old were to be exempt from the annual MoT, I felt like this was marvellous news, like an unexpected birthday gift or Christmas present. But then of course the reality started to dawn…

Would people really stop having their cars checked every year, or put through some sort of annual safety test? Would the roads suddenly be clogged up with unroadworthy old bangers, as skinflint owners short-sightedly regarded themselves as free from any duty of care or safety for themselves and other road users? How long before some terrible accident involving a classic car turned the glare of the media spotlight on to the classic car community, branding all these cars death traps and demanding all such vehicles be banned from the roads altogether?

A little over the top perhaps, but I have heard similar conspiracy theories and wildly dramatic scenarios like this discussed more than I care to mention. It’s for that reason I personally have decided to continue to MoT my classic Americans.

As one colleague said to me: “If an MoT cost three times as much it would still be a bargain. At the moment, paying the cost of half an extra tank of fuel, once a year for an in-depth comprehensive safety test like the MoT is a no-brainer – of course we should continue to do so.”

So why did the Department of Transport decide to exempt vehicles over 40 years old from the MoT in the first place? Surely not for some sort of cosy, cuddly, altruistic reason? Not at all.

With the increasing sophistication of modern vehicles and more and more stringent emissions, vast swathes of the MoT test are to all intents and purposes irrelevant for classic cars. These can include everything from ABS braking systems, catalytic emissions tests, rear fog lights, tyre pressure sensors, air bag lights and so on, all of which take up quite a bit of time, even if to just say they’re not applicable.

Classic cars (or rather those more than 40 years old) count for such a tiny proportion of vehicles actually registered in the UK, that someone at the DoT must have done a cost analysis of the options and worked out it was cheaper to exempt them, rather than, say, introduce a more basic safety test, with all the cost of training and implementing such a ‘dual system’ would have entailed.

Most of us are not professional mechanics and plenty are not even that mechanically minded. Even fewer have access to a garage and all the equipment required for an MoT. That includes everything from a hydraulic lift for inspecting under the car and a rolling road to test braking at all four wheels and of course emissions equipment. For between £40 to £50 an MoT will test a classic car on the following vital areas:

• Corrosion to brake pipes and unions, i.e. imminent failure of something that seems fine right now.
• Perishing of fuel lines, especially in light of the introduction of E5 and E10 fuel.
• Everything that you can only check with the weight off the wheels such as broken springs, play in ball joints (with a 4ft pry-bar) in places such as pitman arm and steering arms; bushes in wishbones, trailing arms and dampers. Also wheel bearings (although you’d often hear them whine or rumble).
• Play in drive-shafts and prop-shafts, especially U-Joints.
• Well-hidden corrosion; something which is much more of an issue on any unibody car, of course.
• Condition of tyres. When did you last check the inside-facing sidewalls for damage, bulges etc.?

While braking performance is something you’d normally pick up while driving – if you were alert to it anyway – what you wouldn’t pick up is the list of things you can only check with the car on a ramp or jacked high and supported safely enough for someone to get under it.

Even if you choose not to put your car through an annual MoT, I would suggest it’s incumbent on anyone as a responsible vehicle owner to simply ask a competent garage to do the relevant checks on corrosion, brakes, steering and suspension, tyres and so on. By having a car up on a four-post lift, a lot can be seen in a matter of minutes.

In a way the exemption has, it would seem, placed more responsibility on the owner to ensure that the car is fully roadworthy at any time of the year. Previously there was always the defensive excuse of: “Well it’s passed its MoT”; however, if that last MoT or safety check was five or 10 years previously, one can only imagine how that could be viewed from a legal point of view.

One final point to remember is that a lot of independent garages will enjoy doing it on older vehicles because it’s something different. If they’re happy to put it through as a real MoT, you should pay less, as there’s no VAT on MoTs. Doing it as a non-MoT vehicle check might take longer and cost more, but it might actually be even more thorough.

Be aware that the tester’s record on failures or passes goes automatically to the new DVSA (Driver & Vehicle Standards Agency) who base their whole enforcement and inspection routine on this data, which garages hate, so be understanding if they don’t want to put the car through as an official MoT – they probably have their reasons.

So what exactly is it that the MoT includes that would be difficult for a home-mechanic to replicate? My 1970 Olds 442 underwent an MoT just recently and it perfectly illustrates why this is in fact a really essential and, relatively speaking, inexpensive safety test.