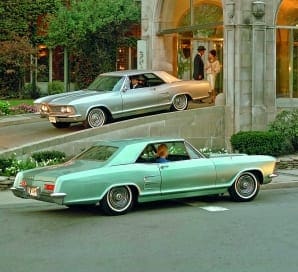 … Or so they say! And we’ve decided to spice things up for a few issues with an extra section of content that we never previously included on a regular basis.

Variety is the spice of life…
Following the recent success of Classic American’s American & Modified supplements, we’ve decided to increase the number of pages in Classic American and introduce a regular eight-page American & Modified section in addition to our usual content. Kicking things off this month is an awesome 1948 Buick Super resto-mod which looks like it’s just been dragged out of a barn, but in fact is running a Corvette ZR1 powertrain underneath. There’s also a page of news and views on the American & Modified scene and this will be a regular feature for the coming months…
But the main event for this month’s issue is the fact we’re celebrating all things Buick, with a Buick special theme running through this month’s magazine. Buick is a proud and successful marque, which astonishingly has managed to weather the storms that General Motors has been subjected to over the past decades. Amazingly – and it’s perhaps not that well known – Buick’s longevity and survival has been down to its success in China, where it’s a sought-after marque among China’s middle classes, even offering models there that are not available in the North American market.
Sadly our second heat of the Footman James Car of the Year competition has been delayed until August, following the postponement of Atomic to August 20 and 21 after the grounds at Sywell Aerodrome were waterlogged. It must have been a hard decision for the organisers, but it was the right one, as anyone who has turned up to a waterlogged event (and even been charged for it!) will know. Hopefully the weather will be stunning in August, so it may even have been for the best – here’s hoping! I hope you enjoy this month’s magazine and by all means let us know what you think, we welcome feedback and comments – positive and negative – from readers to help us bring what you want to read about!