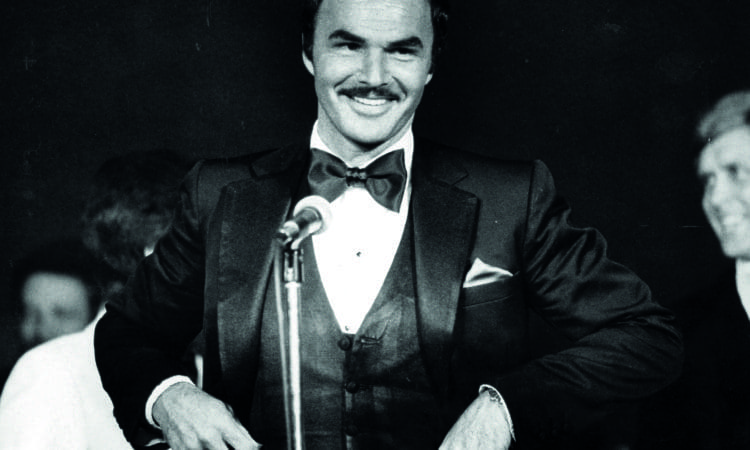 Of course we know and recognise Burt Reynolds now as a massive film star, but his ‘overnight’ fame took many years to achieve.

Born Burton Leon Reynolds Jr, Burt Reynolds frequently claimed he was born in Waycross, Georgia, although in 2015 also stated he was actually born in Lansing, Michigan. Either way the date was February 11, 1936. After the war the family moved to Florida where his father became chief of police.

A gifted football player, Burt received multiple college scholarship offers and attended Florida State University on a football scholarship, playing halfback. He planned a career in professional football, but injured his knee in the first game of the season. Soon after he lost his spleen and injured his other knee in a car accident, and in 1957 gave up football for good.
Reynolds considered becoming a police officer until his father suggested he finish college and become a parole officer. He began taking classes at Palm Beach Junior College. During his first term English teacher Watson B Duncan III, hearing him read Shakespeare in class, cast him in the lead role of a play he was producing. It led to Burt winning the Florida State Drama Award and later referring to Duncan as his mentor and the most influential person in his life.

Summer theatre in New York led to Reynolds’ Broadway debut in Look, We’ve Come Through. He received favourable reviews and toured with the cast, driving the bus as well as appearing on stage. However, during a film audition in 1957 Reynolds was told he could not be in the film because he looked too much like Marlon Brando and it was suggested he instead go to Hollywood. He eventually did and ended up guest-starring on various television shows, later quipping: “I played heavies in every series in town.”

In 1962 Gunsmoke – a top-rated television show of the period – cast Reynolds as blacksmith Quint Asper, one of several Native American roles he would play throughout his career. He stayed there until 1965 when he finally got his first lead in a film, the low budget Operation CIA. Further television and film parts followed throughout the Sixties and along the way Reynolds turned down a part in M.A.S.H. and even rejected the opportunity of playing James Bond, replying to Albert R Broccoli’s request: “An American can’t play James Bond. It just can’t be done.”

Reynolds returned to the stage and, having established a reputation as a witty and interesting interviewee, successfully sat on the other side of the desk to guest host the Tonight Show. But he still wanted to follow his first love of screen acting. His big break came with the 1972 film Deliverance. “It’s the first time I haven’t had a script with Paul Newman and Robert Redford’s fingerprints all over it,” quipped Burt, “the producers actually came to me first. I’ve waited 15 years to do a really good movie, I made so many bad pictures. I was never able to turn anyone down.” Notoriety, and excellent publicity for the film, occurred when Burt posed nude for the April 1972 issue of Cosmopolitan magazine.

Another career-defining moment  occurred with the 1973 film White Lightning, a tongue-in-cheek moonshine and car chase movie. “It was the beginning of a whole series of films made in the South,” Reynolds later remarked, “about the South and for the South… you could make back the cost of the negative just in Memphis.” Car chase films and ‘good ole boy’ parts would soon be Reynolds’ bread and butter. By decade’s end he was one of the 10 most popular American box office stars and stayed that way virtually throughout the Eighties.

A series of car-caper movies such as Smokey and the Bandit and Cannonball Run (see page 23) made Burt Reynolds a household name, but also typecast him against getting any serious acting roles. However hard he tried, virtually every film he made in the late-Eighties flopped. He was still seen as the Bandit.

Reynolds returned to television. The sitcom Evening Shade (1990-1994) where he played a high school football coach was a considerable success, earning him an Emmy and helping revitalise his acting career. His comeback movie role was the successful Boogie Nights (1997) for which he was Academy Award-nominated as Best Supporting Actor.

Rarely out of work, Reynolds contributed to several cartoon series including American Dad! and Archer and was involved until his death in several, as yet, unreleased titles.