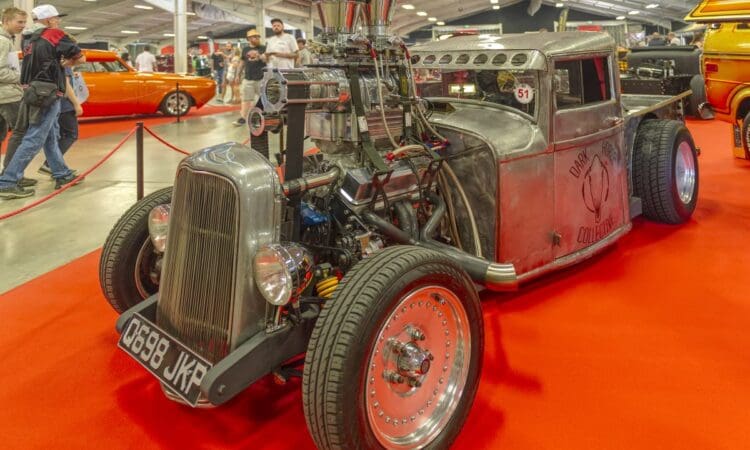 The National Hot Rod And Custom Car Show is a three-day automotive festival and a firm favourite on the UK Hot Rod scene, this year the show was held at a new venue, Stoneleigh Park in Warwickshire. Not only had the venue changed, but the earlier dates this year meant that the show was held over the Easter weekend and unusually for Easter it was actually hot, very hot in fact, with temperatures reaching 25º centigrade.

The format of the show was much the same as in previous years, although the change of venue offered lots more space. The extra space available to exhibitors and stalls, meant there were a lot more car goodies to purchase and loads more cars to drool over. The four halls were split so there were two halls for Modified and two for American and Hot Rods. Outside space was rammed with clothing, food, custom parts, car care cleaning gear, sound system suppliers, club stands and the Show ’n’ Shine field.

The main hall full of Rat Rods, Patina and Traditional style rods, with customs and Americans on one side and on the other side a display of customised vans, Hummers and a stunt bike rink, model drift cars, Low riders and further traders. This year’s live music stage for the Hot Rod show contingent was in the main Hot Rod and American hall, with live Rockabilly and Psychobilly bands throughout the weekend. The campsite, on the far side of the show area, was full and there was a definite party vibe to the weekend, helped along with the many bars and food traders.

Being a family show there was plenty for the youngsters with various activities across the weekend from Zorbing to Simulator rides, being Easter weekend there had to be an Easter egg hunt on Sunday, chocolate had to be involved at some point – it’s the law. The countries’ top modified cars were inside the modified halls with others scattered around the outside of the halls along with even more stalls stuff to flex the plastic with.

Back inside the halls, the Modified’s had their own live music stage with fire eaters and DJs blasting out everything from Drum’n’ Bass to Rap. The level and quality of the cars on display in all four halls from the hot rodders and modified boys and girls were incredible, the purists from either camp could only admire the work on display. The show’s “Best in Britain Prize” was up for grabs again this year along with a multitude of other competition classes. This year’s Best In Britain honours went to Paul Bacon, creator of the totally mental car “Automatron”, a Steampunk inspired masterpiece. An amazing piece of automotive sculpture, it was hard to comprehend the amount of work involved in creating something as mind-boggling as this awesome piece of work.