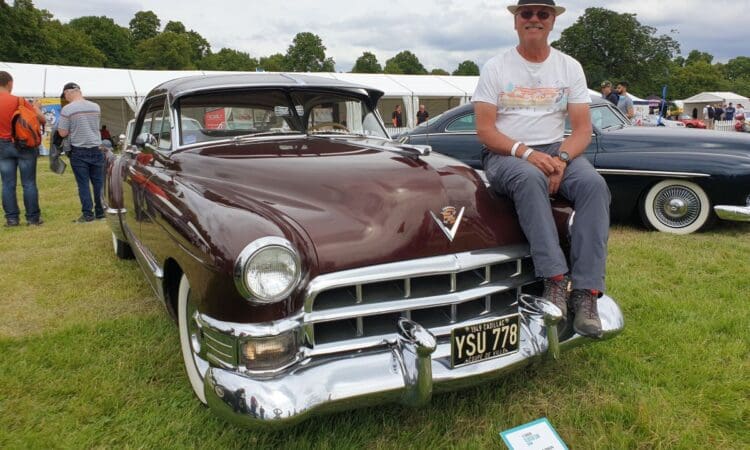 Like a lot of indoor events, the London Classic Car show had to reinvent itself this year and take place outside. Amazingly it was one of the last car events of 2020, taking place indoors at Olympia in London literally weeks before the first lockdown. Syon Park in West London was the new chosen venue and it translated surprisingly well into an outdoor event, especially since the weather was warm, sunny and pleasant.

One would think there might not be a lot to interest American car fans at such a show, but there was actually quite a surprising amount of American content, including the Classic Corvette Club UK’s stand and plenty of Yanks going under the hammer at Classic Car Auctions pitch. The theme for this year’s show was ‘The Evolution on Design’ it was inevitable that there would be a section entitled ‘1950s and 1960s Americana’ with a couple of hot rods, a stunning 1949 Cadillac Coupe De Ville and one of Bernie Chodosh’s racing Corvettes. Elsewhere Corvettes and Mustangs dotted displays, whether clubs, dealers or auction houses – it really does seem as if classic American cars, long viewed ‘sniffily’ by the British classic car establishment, have come in from the cold.

One of the unique features of this show is getting to see and hear the cars moving, something that is so often lacking in a traditional static show. Not so here, where an avenue had been created for the cars to parade up and down, much to the distress of the health and safety bods who decided it was unsafe and stopped it after the first few passes. A shame, but if the event happens again, I’m sure they’ll have come up with a solution. The talk theatre, where automotive celebrities held ‘talks’ was hosted by Tiff Nedell and one particular familiar face (on the American and Custom scene) was that of Andy Saunders who gave a really interesting, funny and warm talk about how he got into customising whilst standing in front of his latest creation, Tetanus, a heavily customised coffin-nosed Cord.

Of course, most classic American car fans are by nature petrolheads, so even some of the non-American content and displays would have been of interest. One of the earliest vehicles on display was a steam driven 1893 Salvesen wagonette, something that looked more akin to an early steam train and sent the aforementioned health and safety bods into paroxysms of panic when it began trundling around the field. This and other very early vehicles were part of a section entitled ‘Where it all began’. Another themed section was ‘Aero-engined monsters’ and these leviathan machines, predominantly from the Edwardian era were truly astonishing to behold.

There were plenty of hiccups and lessons to be learned (getting out of the show was nightmarish with only one exit) and there was a distinct lack of catering, but all in all it was a good event and one worth attending if you’re in or near the capital…. You might want to bring your own sandwiches though!