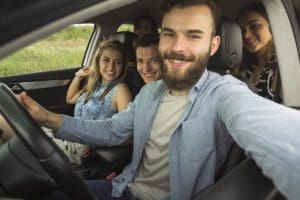 Berkshire-based UK car leasing experts Fulton Leasing have released the results of their recent study into British driving habits, revealing that among those surveyed, millennials are the most dangerous generation behind the wheel. According to a survey of 1,000 British drivers aged 18-65, the millennial generation is responsible for the majority of frequent traffic violations including tailgating, last-minute cutting into slip lane queues and using mobile phones while driving.
Distracted driving

Distracted drivers account for approximately 25% of all motor vehicle fatalities. From March 2017, all UK drivers caught using their hand-held phone at the wheel will be penalised with a £200 fine and 6 points on their licence.

Despite the formal mobile phone ban being in place, Fulton’s study shows that an alarming number of 25-34 years old, along with their younger counterparts aged 18-24, still use hand-held mobile phones while driving, with 12% and 12% respectively admitting to doing so.

Tano Di Girolamo, Managing Director at Fulton Leasing, comments: “A recent Highway England campaign raised awareness of just how dangerous tailgating can be, with one in eight road casualties caused by this habit. Using a mobile phone while driving will drastically impair a driver’s focus on the road and other cars around them. Our study found millennial motorists admit to these habits more than any other age group, which could leave them and motorists around them in serious danger. It is also surprising to see such a high admission rate for mobile phone across all age groups when technology such as Apple Car Play and Bluetooth connectivity is becoming more prevalent in standard equipment lists. A potential concern is that drivers might be using their phone for other purposes such as email or Internet browsing, which could put drivers at even greater risk”.

Traffic light displays and driver behaviours 45% of millennial drivers aged 25-34 admit to accelerating through amber lights. Additionally, nearly 11% of them admitted to running a red light if they have just changed and no one is around, which is the highest percentage across all age groups.  1 in 5 millennial drivers also revealed they don’t indicate at roundabouts, a mistake which can both put fellow drivers at risk, and cause a serious accident.

9% of millennial drivers state not paying attention to blind spots, while their younger counterparts performed worse still, with 11% of those aged 18-24 owning up to not carrying out the appropriate checks before moving off. Survey respondents also faced questions about tailgating – a ‘practice’ responsible for causing 1 in 8 serious accidents on UK roads.

According to the survey, an average of 9% across all age groups admit to tailgating other vehicles. Again, the highest percentage of offenders can be found in the millennial category, with 14 per cent owning up to doing so. Millennial drivers should also polish their skills for motorway driving, as the study revealed that 14% of young drivers aged between 25 and 35 have a tendency to loiter in the middle lane.

Another guilty confession is cutting into slip lane queues at the last moment, which can cause fellow drivers react quickly or risk getting into a collision. Among all age groups, the millennial drivers seem to lead the way, with 21% of respondents in this age group holding their hands up. Millennials were followed by 45-54 year olds (15%) and 35-44 (13%), who also admitted to last-minute line hopping. The least likely to transgress are new drivers (9%), who might simply lack enough road confidence to do so.

Drivers were also questioned about whether they felt they would pass their driving test if they were to take it again. Surprisingly, 1 in 5 millennial admitted that they might find re-taking their driving test difficult, which makes them the least confident group among all respondents.