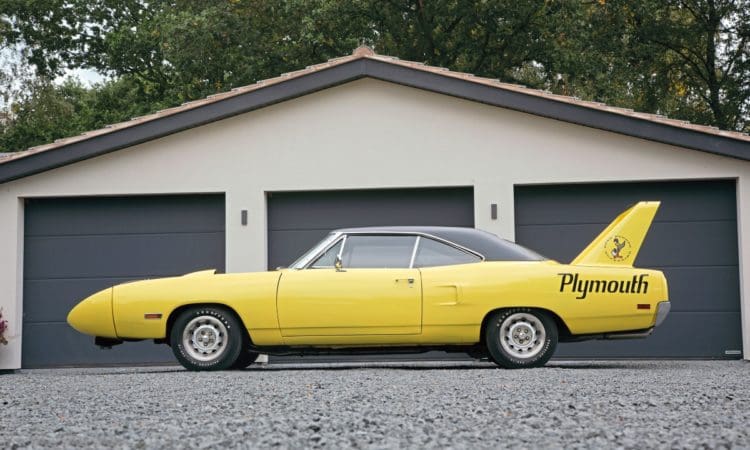 Paul Clarkson jumped in at the deep end with his first American car; this Plymouth Superbird was bought mainly because his son really likes them! Photography: John Colley

When your family are as enthusiastic about cars as you are, it’s inevitable that before long, one will be gracing the family garage. Paul Clarkson’s father owned a number of British classic cars and his brother is very into old Porsches, but it was Paul’s wife Suzanne and especially his son Matt who were the driving force behind buying this Plymouth Superbird.

“I’ve always liked muscle cars,” explains Paul, “and we went on a road trip across America in July 2014 that included visiting Pebble Beach in the hope of seeing a Superbird. Matt loves the cars; he built Lego versions and had Scalextric Superbirds, so we’d become obsessed with seeing one.

“Suzanne then spotted one for sale at a dealership called My Hot Cars (www.myhotcars.com) in San Ramon, California so we visited and chatted to the salesman. He was really helpful and we spent an hour taking photographs.

“About a week after returning to the UK I found Suzanne and Matt on the dealer’s website discussing buying the car. Suzanne reasoned it made more sense as an investment than a buy-to-let property and would be a lot more fun too.” Before long the Superbird was on its way to the UK.

“We used My Car Import (01332 810442 /www.mycarimport.co.uk) in Castle Donington to bring it over,” says Paul, “and they did an excellent job. It went from Los Angeles to New York, then Antwerp to Hull.

“I imagine they didn’t make much profit since the Superbird is so long it meant they couldn’t fit another car in the container. When it arrived it was easily as good as we remembered, the first journey was to Halfords for numberplates and when we came out we couldn’t get near since the car was surrounded by people taking photos. Oddly, most people do know what it is.

“I understand it was a South Carolina car and sold off a dealership floor to a Scott Robinski,” continues Paul. “It had two previous owners, the second buying it in July 2001, at which point I believe it was partially restored and the engine rebuilt.

“It had only done a further 200 miles when we bought it. It has a build date of November 17, 1969 making it midway through the first 300 built and the paperwork that came with it shows it had just 21,300 miles in November 1991, so it’s possible the 28,000 on the clock is genuine. I’m presuming the Plymouth was stored for a number of years.

“The second owner lived on the west coast and was called Joseph Michael Hill Snr. The dealership was selling the car on behalf of the owner because there was some back and forth as we made offers on the price. At some point it got a new set of the correct Polyglas tyres, but beyond that the previous history of the car is sketchy.”

What do we know? A look at the fender tag show’s it’s a 440cu in, single carb car with three-speed column shift automatic. The interior is black vinyl with the bench seat, seatbelts front and rear and has the Tick Tock Tach (a clock inside the rev counter.)

The Plymouth Superbird was born out of a need for Chrysler’s racing cars to go faster. By 1968 they’d wrung virtually all the horsepower they could from their Hemi, but still needed more speed for NASCAR. The answer was improved aerodynamics.

In June 1968 they unveiled the Charger 500 with a flush-fitting grille, A-post covers and flush back window. It was fast, but had too much front end lift. Chrysler engineers calculated that reducing 15% of drag would be like adding 85bhp, so Bob Marcell from the Special Vehicles Group and aerodynamicist John Pointer began sketching Chargers with a sloped nose and large rear wing.

When Dodge vice-president Bob McCurry was assured the design would guarantee race wins he approved the project.

Wind tunnel testing determined that by raising the 12-inch high wing they could reduce its size – which would also allow the 500 street versions they had to build to homologate the design to have fully opening bootlids.

The only problem was that Richard Petty – one of the best drivers of the time, or ever – drove for Plymouth, not Dodge. He was winning races in his Plymouth Road Runner, but he now wanted a Daytona.

When Plymouth refused he went to drive for Ford. Halfway through the 1969 season he’d won nine races and Plymouth offered him a wing car of their own – the Road Runner-based Superbird – to lure him back.

To comply with NASCAR’s 1970 rules Plymouth had to produce 1500 examples of the car that inside Chrysler was referred to as the ‘Belvedere Daytona’. Dodge’s Daytona had been well received, so Plymouth felt producing and selling 1850 Superbirds was realistic. However it turned out the Daytona nose cone didn’t fit the Superbird and the only shared parts were the headlight doors.

Superbirds began life as 1970 Road Runners built at the Lynch Road Chrysler plant; they were then converted by Creative Industries, who had built the Daytonas. It took a lot of hurried work.

Creative designed a ‘cap’ for the rear window to smooth rear airflow and in order to save time – and disguise the welding – all Superbirds received a black vinyl roof. Blending the nosecone in required Dodge Coronet front wings and Plymouth’s designers added a peak to the centre of the bonnet and blacked out panels on the nose.

The Superbird’s diecast wing stabilisers had a wider base than the Daytona’s and a greater rearward rake. It worked, but due to the rear window and high nose height, Superbirds weren’t as aerodynamically efficient as Daytonas.

Superbirds had a 375bhp single carb 440cu in V8 as their standard engine, an optional 390bhp version with three dual-barrel Holleys, or a 425bhp 426cu in Hemi. Required options were power steering and brakes, hood pins and performance axle. Air conditioning, rear defroster and rear seat speaker were not available.

Sadly Plymouth overestimated the market for their wild new car and a number of Superbirds remained unsold on showroom floors as late as 1972. A few of the 1920 (some say 1935) Superbirds built were eventually converted back into Road Runners just to sell them.

Planning was under way for a Superbird based on the 1971 Road Runner, when the racing budget was suddenly slashed. Then when NASCAR, wanting their stock cars to at least appear factory stock, ruled any new wing cars would be limited to 305cu in or be subject to weight penalties, the Superbird programme died a quick death.

“It gets better to drive the faster you go,” laughs Paul. “Around 75mph you can feel the wing stabilise things and above 80mph it’s as easy as any modern car. There are Allen bolts to adjust the wing, but we haven’t played with it. I can imagine it’s as easy to create lift as downforce if you’re not careful.

“It’s not a pristine car, although the interior seems to be original, it has a few small rips in the headlining. Everything works except the radio, it lights up but there’s no sound, not even static, so chances are that’s a loose connection or blown speaker.

“I fitted a passenger side door mirror for motorway driving since it has an enormous blind spot because of the small rear window and, of course, that giant wing doesn’t help. I did a lot of research as to the correct mirror and practically had to part with my life savings to buy it, paying £189! Although I’ve since been told they are a rare part to find in good condition.

“When I got the car inspected, the mechanics said it’s completely solid, the only previous welding was a tiny section on one front chassis leg. All we’ve had to do to it is get a new steering box since the old one was shot and fit a new brake master cylinder. Both parts came from US Automotive (01234 273155/www.usautomotive.co.uk).

“You can tell it’s not a luxury car, though,” admits Paul. “It seems like the panels were a case of ‘as long as the doors still open don’t worry about the gaps’. I try not to take it out in the rain purely because it will spin the rear tyres at 70mph, but this is a car we drive – we’re not precious about it.

“Highlights have included using it for my mate’s wedding where it got a lot of attention, although fortunately not upstaging the bride. We also met Richard Petty at Goodwood and he was keen to chat about the cars and his experiences of racing them. I take it shopping to the local Tesco although we have to park across two spaces. Matt is now 20 and desperate to drive it but he’s still too young to get insured.

“We have absolutely no regrets about buying it. It’s quirky and we all love it.”