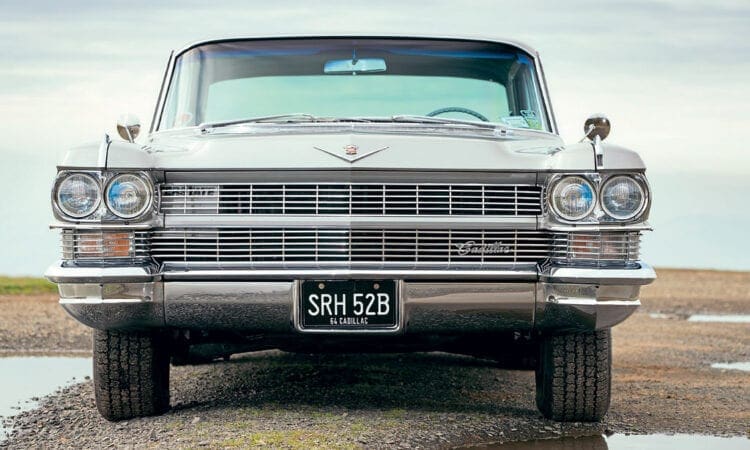 The fame of Cadillac’s late Fifties models eclipses every other era, which is a shame because the cars they built got better and better. Could any year beat a ’64 Sedan DeVille − in this condition? Car of the Year judges didn’t think so!

I need to declare an interest here. I once owned a pair of mid-Sixties Cadillacs and I wish I had one now. I regard them as a bit of a high-water mark for the division, and the industry as a whole. And I may never get a better car with which to demonstrate the argument than Graham Macdonald’s wonderful ’64 Sedan DeVille.

Graham took his car to the NEC in November, where many of you will have had the chance to see it up close. At first, you think how nicely it’s been restored. Then you look a bit closer and wonder how they got certain areas to keep that untouched, original look.

Finally, it dawns on you that it hasn’t been restored, it’s just had a very good repaint some time in the last decade or so and the interior’s barely been sat in. It is, in fact, as close to a nearly new 1964 car as you’re going to get.

The odometer is showing a touch over 50,000 miles, and while we don’t know much detail from its American past, we can assume a long period of dry storage or perhaps ultra-light use. That mileage is a surprise because close-up, it looks about six months old. You’d guess 5000 rather than 50,000.

In 1964 Cadillac was still enjoying a long, steady evolution from the point where the overhead-valve V8 arrived in 1949. There were continual updates in styling, sometimes slight and sometimes more significant, like the lower, wider look of the iconic ’59 models or the stacked headlamps of the ’65 to ’68 cars.

The DeVille coupes and sedans grew larger and longer up to the end of ’76, when downsizing began and nothing was ever quite the same again. At some point in that long arc, the blend of technology, build quality, styling and performance hit a subtle peak. And I think we’re looking at it right here.

For a start, the styling heritage of the ’59 and ’60 cars is still there − quad headlamps in side-by-side pairs with long, sharp-edged fins running well into the doors. Everyone knows, straight away: it’s a classic Cadillac. Under the skin it’s evolved a little from the 1959 cars, and for 1964 it gained a new 429cu in version of Cadillac’s big-block V8 (which itself was reduced in mass and width for ’63) plus Turbo-HydraMatic transmission.

With 340bhp at just 4600rpm, the performance put most sports cars to shame. We found an Autocar road test of a new Coupe DeVille from August 1964, and as the Coupe was only 80lb lighter than Graham’s 4575lb Sedan, the differences on the road would be slight.

It topped out at 121mph and managed 0-60mph in 9.7 seconds. An American road test, perhaps conducted by people more used to hustling big automatics off the line, beat that figure easily, and with a Sedan DeVille: 0-60mph in 8.5 seconds. Autocar managed the 40mph-60mph overtaking romp in an impressive five seconds flat – still rapid today.

As a magazine that focuses on what America produced, we don’t need to embarrass the British stuff, but…well, it’s fun! Any ’64 Cadillac was quicker than either a Jaguar Mk 2 3.8S or the larger 4.2-litre Mk X. Top-notch British luxury from Rolls-Royce wallowed further behind, both on the road and in the equipment lists, as Autocar pointed out: “…it has several luxuries incorporated, or available as extras, that cannot yet be had at any price on European cars.”

This is where Cadillacs of this era really score. If you drew up a list of the modern conveniences you’d demand from a new car in 2019, an astonishing number are present on Graham’s Sedan DeVille. No, you won’t find sat nav or parking sensors, but everything else that can be annoying by its absence on older cars is there.

Three-speed wipers? Check. Signal-seeking radio? Check. It’s also a ‘yes’ to electric seats, adjustable steering column, electric aerial, remote door-mirror adjustment, cruise control, headlamps that come on automatically and dip themselves, a trunk lid that pulls itself down and locks automatically when closed, and which you can release from a button in the glove box.

There’s central locking with a command switch on the driver’s door, there’s even climate control. Yup, combined control of both heating and cooling functions made its debut in production cars at this point. And it worked well.

Obviously, you will have taken power-assisted brakes, windows and steering for granted. Even the quarterlights turn at the touch of a button. In fact, Cadillac offered so many of these luxury functions either as extras or standard equipment by 1964 that you wonder where else they could go from there.

By the mid-Seventies the new kit was still coming, but it was often the kind of stuff that’s fun when it works but hardly vital − bulb warning monitors, washer fluid gauges, self-levelling suspension. That last one had been around in an earlier form as far back as the 1957 Eldorado Brougham, and still gets replaced with less troublesome coil springs and dampers. No such complications in ’64.

Cadillac suffered far less from the penny-pinching that started to blight some American marques through the 1970s, but while build quality remained high, the materials which the proud Cadillac crews were being asked to assemble – especially interiors, with plastics replacing die-castings – perhaps dipped in durability. It’s a pretty subjective point, but a 1970s Cadillac tended to look scruffy sooner than a 1950s or ‘60s Cadillac.

All of which drags us back to the theory that by 1964, Cadillac was building as good a luxury car as you could buy, and one the company would struggle to better. That’s probably Graham’s view too, though his interest in American cars started with a Ford. As a car-mad boy growing up in Bedfordshire in the 1960s, it hinged on one set of friendly neighbours.

“We lived near RAF Chicksands and our American neighbours worked there,” he says. “This was in the days before my mum learned to drive, so we’d occasionally get lifts from them in their 1964 Ford Galaxie. To my brother and I it seemed other-worldly…so incredibly huge after our dad’s little two-stroke Saab. From then on, I thought the size and styling of American cars of that era were fantastic.”

Graham collected every Corgi and Dinky version of such cars that he could lay his hands on, and rapidly became one of those kids who could tell you the make and model of any car simply from glimpsing a corner of the roofline or one headlamp. After school he entered the motor trade and he laughs ruefully as he recalls his time as a trainee estimator for warranty claims at a British Leyland garage.

“I was certainly kept busy! Eventually, we moved to Worcestershire and I started working for a restoration company. Through that, I met the motoring author Lindsay Porter. He heard I had a City and Guilds in photography and thought I could be useful. I built up the first Heritage MGB shell and took the pictures for Lindsay’s MGB Restoration Manual.”

If you were an MGB owner and you’ve still got a copy, that’s Graham in lots of the pictures too. Soon after, he began working with the cars he grew up with – but not the American ones. Graham runs a classic Saab specialist called Macdonald Classic Cars and a parts supplier, The Saab Shop. But that fondness for Yankee metal never went away.

“I realised that if you looked at all the photos I’d taken at car shows for the last 40-odd years, at least half of them would be American classics. And yet, before this Cadillac I’d never owned one… goodness only knows why!”

But it’s never too late: “I saw the Cadillac advertised online and it struck me as an unusually nice one. I was showing a Saab at an event called Saabfest near Warwick. I slunk off early to see the Cadillac between Worcester and Bromsgrove with a good mate of mine, Chris Hull, to keep me on a relatively tight leash… which failed, I guess! Once I’d seen it, I loved the car and went back later to view it on a lift. It was as good as it looked from above and we struck a deal.”

This was end of summer 2017, since when Graham has had just over 2000 miles of motoring, including the dazzling summer of 2018. Could it possibly live up to expectation on the road? Does it drive as good as it looks? “It’s been everything I’d hoped and more. It’s really, really good on the road. I got Gaz to make me some adjustable dampers for it and it’s made the ride a lot more controlled – for a big old girl, you can really chuck her around!”

Little else was required, bar the replacement of the original Wagner halogen sealed-beam lamps (yes, halogen headlamps in 1964) with brighter Cibié items that dip the right way, a change of fluids and a good mop ‘n’ polish. Oh, and a bit of building work.

“I had to build an oversize car-port,” confesses Graham. “She wouldn’t fit in the garage!” Performance hasn’t dulled at all since new, from what Graham says. The big Sedan charges past the legal limit on the motorway unless he’s vigilant about reining her in, and a bootful of gas at any speed sees the nose rise up as the car makes a dash for the horizon.

From what Graham could learn through the previous owner, the Sedan DeVille had four owners in the States. It came originally from California, then went to Denver and eventually arrived in New York for tours around the city. But this must have been a brief phase…one look down the immaculate flanks tells you it didn’t spend long mixing it on Manhattan’s streets.

Now it’s enjoying a gracious retirement in Herefordshire. If you’re in a narrow country lane anywhere near Bromyard, back off a little, because Graham and 18½ ft of Cadillac might be around the next bend. And it would be a shame to spoil it, don’t you think?