There can be little doubt that the Power Big Meet has been one of the most amazing American car events on the calendar for the best part of three or four decades now. I first went in 1999 and have been intermittently going ever since. For me it’s such a treat, that I deliberately ration myself, going every two, three or four years, so that I don’t become jaded with it. However, in that time, it’s become a bit more of a challenge to visit, as ferries to Sweden were discontinued (and latterly to Denmark too) meaning that a ferry to Amsterdam, then driving through Holland, Germany and Denmark on to Sweden was the only option.

I had planned on driving this year with a friend/colleague; however a knee injury prevented him from joining me, so I cancelled the ferry to Amsterdam and booked flights instead. There was no way I felt it was safe to drive 3000 miles on my own in a week, but in many ways it turns out that this was probably for the best, as this year the Power Big Meet had relocated about 250km south from Västerås to Lidköping, a pretty little town about two hours north of Gothenburg.

To complicate matters further, a show/event called the Västerås Summer Meet had been organised over the same period at the original location in Västerås (Thursday, July 6 to Saturday, July 8). What to do? Well, since I was flying into Gothenburg and picking up a rental car, I decided the best course of action was to visit both, which meant plenty of haring up and down the E20 highway between the two events. 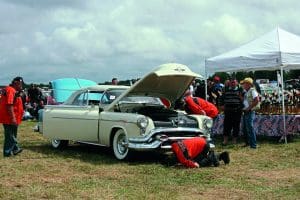 The million dollar question of course is – which show was better? I’m afraid I can’t really answer that; certainly it sounded like the evening cruising in Västerås was better than that in Lidköping, which was snarled up and congested, although it went right through the city centre. This could always just be down to the fact it was the first year they had hosted the event, and the city certainly seemed to have tried to capitalise on it, with live music downtown and a carnival atmosphere. Both shows had obviously diminished numbers in terms of traders and participants and while the Västerås Summer Meet had tried to mix things up with live music, a beauty pageant and an area selling beer, the atmosphere felt a bit flat. 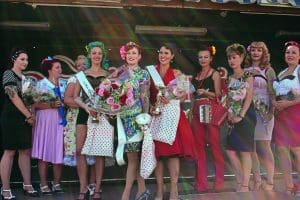 I don’t think it would be an exaggeration to suggest that a lot of punters felt confused and many, like me, spent their time shuttling backwards and forwards between the two events, as was evidenced by the number of American vehicles driving back and forth on the E20 highway. The verdict? I believe in the coming years one or the other of these shows will become ‘the one’ everyone goes to and rather than having two ‘so-so’ shows, there will be one big successful one, as has been the case for the past 40 or so years…