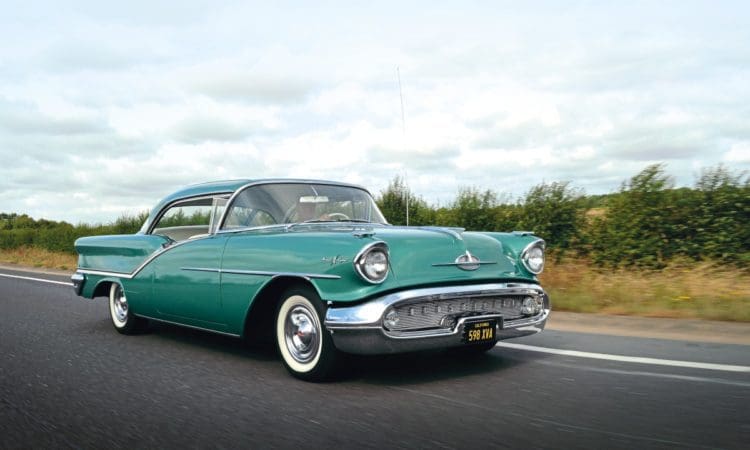 Steve Foster’s 1957 Tri-power equipped Oldsmobile 98 lives up to its name as a stylish and remarkably agile car.

Detroit in the late Fifties was turning out cars that were getting bigger, brasher and flashier and yet, some would say, less functional in terms of practicality and driving enjoyment. In the styling departments at most of the major manufacturers it was a case of who could out-chrome who, and Oldsmobile was no exception.

Along with other GM Divisions, Oldsmobile showed off its latest styling and design ideas at the GM Motorama show of 1953 in the form of the Starfire Convertible. It never saw production, but a number of its features did make it into Oldsmobile designs later on.

In 1956, Oldsmobile’s advertising described the new Oldsmobiles as ‘Starfire-styled’, and by 1957 Starfire had become a nameplate on the ‘98 Series Holiday Coupe and Sedan models.

Despite having huge chrome bumpers, chrome strips along each body panel crease and even layers of chrome inside the car, on the dashboard and steering wheel, the styling of the ’57 Oldsmobile range maintained a balance in its appearance which would give it an attractive and well-proportioned look; making the 1957 range, and in particular the 98 Series, an iconic year.

What makes the ’57s stand out, perhaps, is that it was the last year before the whole industry took that apocalyptic leap into the age of twin headlamps, a trend that would see stylistically disastrous results as well as successes.

It was the styling of the ’57 Oldsmobiles which caught Steve Foster’s attention while he was still at school; an American car spotter’s guide being the catalyst. At age 18, Steve was working at Vauxhall Motors in Luton as an apprentice model maker and had saved enough money to buy a car, so he started looking around for a 1957 Oldsmobile – but not any old ’57 – it had to be a Starfire 98 Holiday Coupe.

“I saw a ’57 Olds for sale in Potters Bar for £200. Someone was already test driving it when I got there, but I’d already phoned first and the guy who was driving it said I’d got first shout on it if I wanted it.

“I then took it out for a test drive, but it didn’t drop into fourth gear; it only had the first three gears. But, of course, I loved it because it was a ’57 Oldsmobile, like I always wanted… I said to the guy selling the car, ‘Would you take £150 for it and I’ll drive it away’… and he said ‘Yes’ and that was that!

Steve spent the next six to nine months repairing the car and getting it painted red. He fitted a set of Wolfrace alloy wheels and “put a crazy fur interior in, which back then was all the rage”.

Steve owned the 98 for two years and then swapped it for a ’65 Fastback Mustang, something he later regretted as he still had a hankering for another ’57 Olds – one day. The day didn’t come around until some time in the late Eighties, when he went to live in the United States.

By this time, Steve had become a professional automotive stylist, contracting his skills to whoever needed them, and while in America he came across another ’57 Oldsmobile 98 Coupe just like the one he had swapped for the Mustang back in his twenties.

This car was in a junkyard in Maryland, and only had surface rust on the roof, bonnet and boot, whilst the frame and underside looked sound. So he bought the car and had it made roadworthy.

The Olds was then put in storage for two years, as some jobs had come up in Europe – one in Holland and then one in Sweden. When the time came to move to back to the States for a job in California, Steve decided to take the ’57 Oldsmobile with him.

He had fitted a new dual exhaust system, the car had a new set of tyres and had been fully serviced prior to the trip from Maryland to California. With him were his wife and four children. This was in January 1987.

Four hours into the journey, Steve decided to get some fuel and check the rear brake as it was ‘tugging’ a bit. Before he had a chance to stop, disaster struck: the rear tyre exploded.

“I pulled over to the side with the tyre shredding itself and I calmly got out and lifted our cases out of the boot to get to the spare wheel and jack, and heard some crackling sounds. I looked around and it burst into flames!”

Just then a big rig came along the freeway and Steve flagged it down. The driver screeched to a halt, wound down his cab window, threw a fire extinguisher out of the window, and drove off.

Steve then ran back to the blazing car and put the fire out. By this time his wife and children were safely standing on the side of the freeway, when… thirty seconds later, a second explosion engulfed the car in flames. It was a total loss, as well as a financial loss because Steve was only insured with liability, not comprehensive insurance.

As he was not an American citizen and was driving a car out of state, he could not get a comprehensive policy, so nothing was recoverable. Everything Steve had put into the car just went up in smoke. All he and his family could do was stand and watch.

Despite this awful scenario, the incident did not put Steve off having another ’57 Oldsmobile 98, but he didn’t pursue buying it for several years. He returned from the States to work for GM in Germany, at the Rüsselsheim plant, where he assisted in the re-styling and facelift of the early 2000s Chevy Malibu, working with Ed Wellburn, then a senior stylist.

By 2017 Steve was back in the UK, semi-retired and looking for a car. In the autumn of 2017 he saw one on eBay, but he had already committed to another car he wanted – a 1933 Cadillac.

Steve explains what happened: “Literally, a couple of days later, I was searching on eBay and the Oldsmobile came up. I couldn’t believe it. I probably wouldn’t have bought the ’33 Cadillac if I’d seen the Olds first, but I thought, ‘I can’t let that go’!”

So, the deal was done and his dream 1957 Oldsmobile 98 arrived with very little having to be done to get it into the glorious condition it is in today.

As far as the options list goes, Steve’s car is fully loaded, including the very rare option of air-conditioning. It is probably a rare feature in a car of this kind for a very practical reason – price. Factory aircon was $500.

A Deluxe radio with rear speaker is fitted, although a Super Deluxe ‘Wonderbar’ radio was also on the options list. Jetaway Hydra-matic four-speed automatic was standard on the 98, but Steve’s 98 does have one additional option that is now very desirable − and rare: The J-2 Rocket engine induction option with Tri-power – three two-barrel Rochester carburettors.

Introduced in January 1957, it was only $83 and for that you got 23 extra horsepower over the standard Quadra-jet four-barrel carburettor, pushing the 371 cubic inch Olds V8 to 300hp at 4400rpm, with torque rising to 450lbs-ft.

In February 1957, journalist Joe Wherry tested a J-2-equipped 98 for Motor Trend magazine and claimed a 0-60mph time of 9.4 seconds – not bad for a car weighing nearly 4500 pounds. To add to its race-car cachet, in 1957 Richard Petty drove a J-2-equipped Oldsmobile 98 in NASCAR races, along with his father, Lee Petty, for the Oldsmobile factory-backed race team.

Steve’s car was built in the Lancing, Michigan, GM plant, but was sold new by a dealer in Minnesota, Darling, St. Paul, and then spent some time in Chicago, before ending up in California, near Los Angeles, which is where it was when Steve bought it.