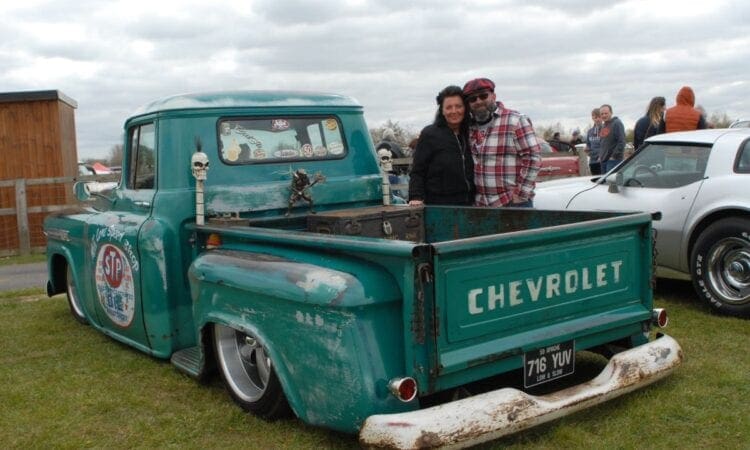 The knucklebusters car club and Stonham Barns Park Holiday Park collaborated to put on what was effectively the first custom/hot rod/American car show of the year – and for many, literally the first event of any kind for 12 months… The sense of joy at being released and in the company of fellow rod, custom and American enthusiasts was almost palpable, despite a somewhat chilly and overcast day. “Hey, at least it’s not raining!” was the common refrain.

Normally it would be Wheels Day down in Aldershot on Good Friday kicking things off, but that was not able to go ahead for the second year running and so in a way, Stonham were lucky to get that first event of the year billing, with some similarities to Wheels Day’s set-up. John Price was on hand to the commentary and there was live music from the talented Rockhouse, with sets by DJ Nadge and plenty of enthusiastic dancing going on. There was quite a mix of cars like Wheels Day too, with classic Dubs and British classics mixed in, as well as rods and customs and of course plenty of Yanks.

Stonham Barns is a holiday park, so has plenty of onsite attractions for visitors to the car show not so interested in cars (kids and other family members,) including a funfair, retail and there was even a car boot sale in full swing the morning of the event. Other attractions included traders dealing in everything from auto jumble-esque type of offerings, car detailing products, Americana, as well as American car books and models. There was food and drink aplenty, including an excellent noodle bar!

The turn-out of vehicles was impressive too – one particularly eye-catching van belonged to Jim Savage, from Hitchin, Hertfordshire. A 1968 Ford Econoline van, Jim had created a ‘hybrid’ Seventies custom van complete with louvres, porthole windows, side-pipes and custom wheels, whilst celebrating his great passion in airbrush on the van’s sides: Fifties Rock ’n’ Roll culture (hence hybrid: a 70s van celebrating 50s pop culture). It sounds like it wouldn’t work, but it really does with airbrush murals of Fifties British icons like Marti Wilde and Billy Fury on one side of the van and Fifties American icons James Dean, Elvis, Little Richard and Marilyn on the other. This was its maiden voyage and it made quite an impression.

There were a lot of cars for sale – pick-up trucks especially. Spring is of course the traditional time for people to start trying to move vehicles on and it was interesting to see one vehicle which had caught my eye on a particular on an online auction site up close and personal. The car in question was a 1969 Pontiac Bonneville convertible in a very fetching dark green with a black top. Online listings can be very deceptive, but seeing a vehicle in the metal is far less so and this big beautiful boat of a car looked as nice in real life as it did online. And for £15k? Now that’s a real bargain in my opinion and very reassuring that American cars can still offer so much bang for your buck.

Another stand-out car was one that many people may have walked past and not given a second look at; a right-hand drive 1960 Ford Galaxie Sunliner. So what’s so special? Well, as we know these RHD Fords were built in Canada for the UK and other ‘Empire’ right-hand drive markets such as Australia, New Zealand and South Africa. What makes this car special is that it has had the same owner for 50 years and was brought by owner Roy Bostock, from Ipswich when he was just 17-years-old in 1971 and it was sold new by a local Ford dealership.

Roy takes up the story: “I’d just stopped at the petrol station, and this pulled in. I was driving a ’64 Mark III Zodiac at the time and went over to speak to the owner. He turned out to be a dealer and he’d only bought it for his summer holidays… it was an 11-year-old car then and they weren’t that desirable then, so we did a straight swap!”. Amazingly the car still wears its original Yosemite Yellow paint, interior and just about everything else, only the top has been changed. Eagle-eyed readers will spot the only modification from original are the period Plymouth hub caps which were on the car when Roy first acquired it – and it’s still only got 62,000 miles on the clock. Speaking of low mileages, they don’t come any lower than the 1955 Plymouth Savoy belonging to Roger Sharman from nearby Woodbridge and who’s stunning 1960 Cadillac was a Car of the Year heat winner in 2014. This time capsule car has only clocked up 6000 miles in 66 years. All in all, despite the weather, the Knucklebusters and Stonham Barns put on a great show and it was a great start to the car show season – let’s hope this is the start of many more to come!