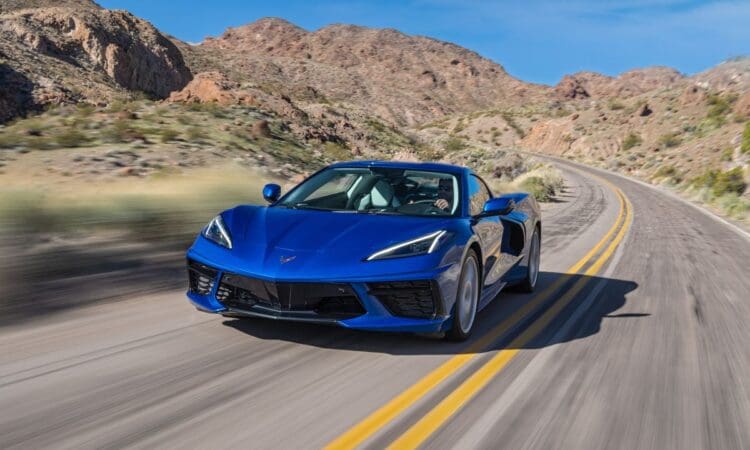 With its mid-engine configuration, redesigned chassis and coil-over suspension, the C8 Stingray marks the biggest rethink of the Corvette formula since the car’s inception in 1953. Making its public debut just a few months before the onset of the COVID-19 pandemic, the C8 has been impacted by production disruptions, parts shortages and price hikes.

Even at a base price of $62,195, the 2022 Stingray offers a lot of bang for the buck stateside. Offered in three trim levels, 1LT, 2LT and 3LT, the 2021 model is offered as either a coupe (with removable targa roof panel) or a convertible. Behind the seats is an all-aluminium 6.2-litre V8 cranking out 490 horsepower at 6450 rpm and 465 lb ft of torque at 5150 rpm in US trim. Featuring dry-sump oiling, direct injection and an 11.5:1 compression ratio; it is still a pushrod engine, with a single camshaft mounted in the block and two-valves per cylinder.

Teamed with it however, is an eight-speed dual clutch gearbox (no manual option is currently offered in the C8,) though drivers can shift the gears themselves via a pair of steering-wheel mounted paddles. Suspension consists of unequal short/long arm (double wishbones) both front and rear, along with Monotube dampers; Magnetic Ride Control is available to further enhance handling capability. A unique feature offered on the C8 is a height-adjustable front suspension, designed to provide adequate ground clearance when negotiating steep ramps, speed bumps or driveways.

Opting for the Z51 performance package bumps power and torque up to 495bhp and 470 lb ft – aided by a special dual-mode exhaust. The Z51 also comes with more aggressive, stickier (summer only) Michelin Pilot Sport 4S tyres (sized the same as Pilot Sport all-seasons on the base car—245/35ZR19 front/305/30ZR20 rear); as well as a standard; electronically-controlled limited-slip rear differential and larger diameter brakes (13.6-in front, 13.8 in-rear).

For the 2022 model year there are some significant announcements, namely a special edition Stingray that pays homage to the C8.R’s dominance in the IMSA GTLM series. Known as the IMSA GTLM Championship Edition, these cars are based on the 3LT trim level Stingray equipped with the Z51 package. Two versions are offered, one with Accelerate Yellow paint (#3) and Hypersonic Gray (#4). The yellow cars feature contrasting grey graphics, the grey ones, vice versa.

Inside, these cars get a specially finished two-tone cabin with Strike Yellow and Sky Cool Gray; which includes a pair of GT2 seats (competition chairs are optional) and a special numbered C.8R plaque for each car. Stateside, the IMSA GTLM Championship Edition costs $6,595 on top of a Z51 equipped 3LT and only 1000 will be produced, all with left-hand drive.

Stingray in the UK

Among the big news for 2022 is also that the eighth-generation Corvette will be sold in the UK in factory right-hand drive. Initially, the car will be offered as a Launch Edition, based on the 3LT trim level. These models will come with standard Magnetic Ride Control suspension, as well as upgraded seats and specific carbon-fibre accents.

All UK-spec C8s will come in 2LT trim with the Z51 package as standard, though interestingly, the all-season ALS Michelin Pilot tyres will be offered, as well as the more aggressive Pilot 4S (standard on the stateside Z51). In the UK, the new, mid-engine Stingray is expected to retail for £81,700 for the coupe and £87,100 for the convertible and will be offered through concessionaires Ian Allan Motors Virginia Water.

As with all existing C8s, the UK cars will come exclusively with the eight-speed twin-clutch gearbox, which can be shifted automatically, or in manual mode via the steering wheel mounted paddles. The availability of a factory right-hand drive Corvette in the UK, following on from the Mustang, will no doubt broaden the car’s appeal among British motorists, but the question remains among American car fans (including the readers of this magazine), would you prefer to have one of these in your drive/garage, or a “traditional” left-hand drive model? Send us your thoughts. HE