It was a moment to savour for throngs of fans at Dragstalgia; perhaps the most poignant moment in Santa Pod Raceway’s half-century of history.

The plan for the Dragstalgia historic drag race meeting had been to recreate the first run ever made down the Santa Pod dragstrip: early on the venue’s opening day, Easter Monday 1966, Harold Bull and his little hand-built dragster, Strip Duster, powered by an engine lifted from a Morris Minor, had traversed the length of the track, the first of countless thousands of runs to be made over the next 50 years. Recently, Harold’s son, Simon Bull, had built a perfect replica of the car under Harold’s supervision (the original Strip Duster chassis is believed still to exist somewhere in Germany) and would mark that inaugural moment in Santa Pod’s history by piloting the car up the strip during Dragstalgia.

Alongside would be another modern replica of an early racing machine. Ken ‘Flathead’ Cooper was a drag racing pioneer whose activities pre-dated Santa Pod – his nickname arises from his predilection for Ford’s workhorse flathead V8 of that era. Son Bradley Cooper had lately replicated one of Ken’s cars, again with his father’s help, and races it at historic events. Simon Bull and Bradley Cooper would drive their respective mounts side-by-side up the strip as a fitting 50th Anniversary tribute.

That, at least, was the plan.

Yet as the two dragsters swung out from the pairing lanes and approached the start line, it was not the sons discovered at the controls but the fathers themselves. At 91 years of age, Harold Bull was about to become not only the first driver ever to traverse the Santa Pod quarter-mile, but now the oldest too. Ken Cooper, a mere stripling at just 79, might well be next in line. Decades have passed since either had last piloted a competition car.

Awaiting them on the line was Santa Pod’s onetime Chief Starter, Stuart Bradbury, wielding the flags he had once used in the days before the electronic ‘Christmas tree’ starting system was installed. With a wave of the flags, the pair were under way. Age plainly does not dampen the competitive fires, and what was intended simply to be an exhibition pass turned out to be anything but a meander. Harold Bull got the jump on his younger opponent and appeared to be ahead at the finish line too. Since neither car staged in the modern manner, times and speeds were not recorded. In their heyday, both racers were accustomed to clocking 10-second passes at over 130mph. Their 2016 performances certainly looked respectable by comparison. Applauded by spectators all the way to the finish, the pair received a further ovation from the track marshals as they pulled to a halt at the end of the shutdown area half-a-mile beyond.

For those onlookers old enough to have watched Harold Bull and Ken Cooper in their prime as leading lights in the formative days of British drag racing, this extraordinary match-up was an occasion none would ever have expected to see happen. Those too young to remember found themselves privy to a unique moment of motorsporting history that they will do well to treasure for the rest of their days. 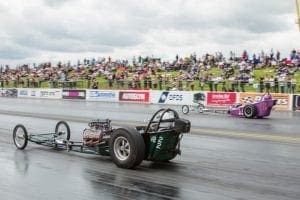