Classic American takes its hat off to Steve Biddlecombe and his team who organised the annual Boxing Day meet in Romsey, Hampshire. Not only do they organise this excellent event which gives Classic American (and other classic) fans respite from that difficult time of year we know as ‘Christmas’, but also they raise money for the charity Prostate Cancer UK. 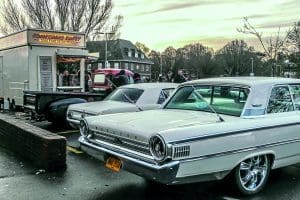 This year they raised more than £5300 and in conjunction with the event we thought it only charitable to run a little photo competition for the participants. Overall winner and winning a year’s subscription to Classic American was Josh Amey, with his rumination on a moody blue Mustang. Runners-up included Steve Favell and his shot of a Chevy pick-up and Michael Guy’s atmospheric line-up of Yanks (left). Way to go guys, only another 10 months until the next one!