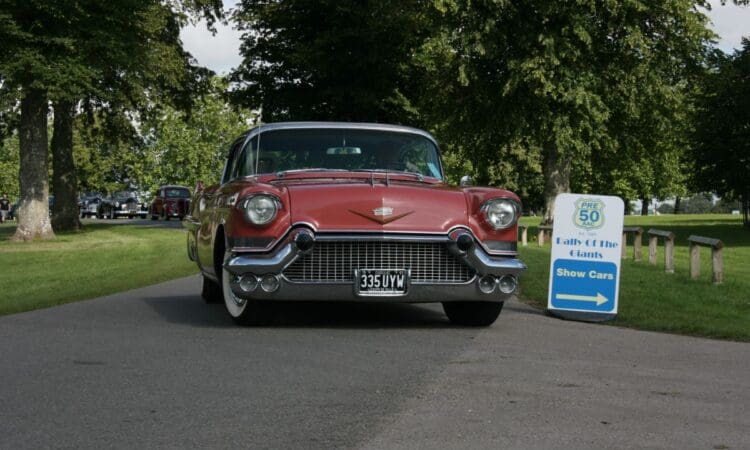 The weather gods must have been looking favourably down on the Pre-’50American Auto Club, as there was nothing in the way of rain for their 55th annual Rally of the Giants, despite heavy downpours the week preceding it. The event has settled well into its home at Blenheim where it’s been held for almost a decade, since moving from Knebworth, with this year having probably one of the biggest turnouts of vehicles ever.

Although this show is always noted for the number of older pre-War cars in attendance, this year saw fewer than previous years. Onlookers wondered if it was due to Covid (older owners shielding etc.) or just the fact that fewer youngsters were getting into the old car hobby as reasons for the diminishing number of veteran cars. It’s a shame, as it’s the presence of these older cars that’s always marked this show out as different from others on the calendar; however, one can’t make the older cars come if their owners are unwilling to bring them, or simply unable to.

One car that seems to have been popping up all over the place is the delightful 1941 Cadillac convertible which belonged to former Pre-’50 AAC stalwart Steve Passmore, who recently passed away. Painted in Monica Blue, the car was restored in Florida and was imported in 2015 by Steve and looks to all intent and purposes like a classic pre-War Cadillac. But, as owner Peter Cornwell explained, all is not as it seems, as under the bonnet lies – shock, horror! – a Chevy small block engine hooked up to a modern GM four-speed transmission. When Peter bought the Cadillac, it came with a period-correct engine and gearbox, but for now he’s just enjoying its motorway-friendly practicality and who can argue with that, especially in this time of the ironically named ‘Smart’ motorways…

It’s always good to see fresh blood entering the hobby and one youngster making his automotive debut was Ford Critchlow, who bought along his eponymous 1930 Ford Model A roadster, that the previous day had been gracing the Pendine historic racing event in Wales. Fitted with a four-pot motor, twin carbs and a Riley manifold, Ford imported the car last year and had to deal with all the fun and games that the DVLA has been inflicting upon car owners during the pandemic. Although it’s primered state is fine in sunny dry California, it’s hardly ideal for the UK, so he hopes to paint it in the coming months and maybe undertake a roof chop too.

Another newcomer to the American car scene, but with a completely different kind of American vehicle, was Simon Hodgson who brought along his 1968 Lincoln Continental coupe, equally patina’d as the aforementioned rod, he acquired the car from eBay (I clearly remember looking at it when it was listed and thinking what an incredible steal it was for such a big, luxurious and solid-looking car). This is Simon’s first American car and he really has jumped in at the deep end, although he’s taking it all in his stride and is thoroughly enjoying the experience. The car hails from Illinois originally (it belonged to a Sheriff in Illinois, with a sticker inside the trunk to prove it!) and although solid and patina’d, Simon aims to paint it eventually and sort out some of its more annoying gremlins such as non-functioning power-windows and so on.

There are always cars to wow you at the Rally of the Giants and this year was no exception. All the way down from Stockport was Car of the Year heat winner Steve Sullivan, whose 1955 Thunderbird was a participant in the 2017 competition. He’d brought along a 1958 Cadillac that he’s spent the past few years restoring – It was the talk of the show and Steve admitted that he may have actually produced a Cadillac that’s actually superior to what would have rolled out of the factory 63 years ago, such has been his attention to detail.

Another stunning Cadillac was Terry Jeeves 1954 Cadillac Eldorado which picked up the Best in Show gong, all the more unusual as Terry is known for being a Ford man, but this baby blue Caddy has obviously tempted him over to the dark side! And who could fail to notice the 1959 Cadillac Brougham brought along by Graham Saggers… they don’t get any rarer than that! Twenty years younger was Nigel Perring’s one family owned 19,000 mile 1980 Cadillac Eldorado which looked as if it had just rolled out of a dealership. Keeping with the Cadillac theme, the most outrageous line-up of cars was that of the Cadillac Kings car club, who displayed some incredibly customised Cadillacs, including a hearse and heavily modified Sixties convertible.

All the way down from Scarborough, Peter Rickinson’s 1948 Chrysler New Yorker convertible caused quite a stir with its mirror-like black paint and period-correct tartan interior, as did Mark Hatton’s 1941 Buick Sedanette which came across from Swansea. As with just about every other event so far this year, the consensus was that it was good to be out and about doing normal things and with an absence (for many people,) of foreign holidays, shows such as this were bursting at the seams with cars and visitors from all over the country. Another vintage show staged by the Pre-’50 AAC who must be patting themselves on the back for such a delightful event. If you haven’t been before, make sure you mark it in your diary for next year when it’s provisionally scheduled to take place on July 10th!