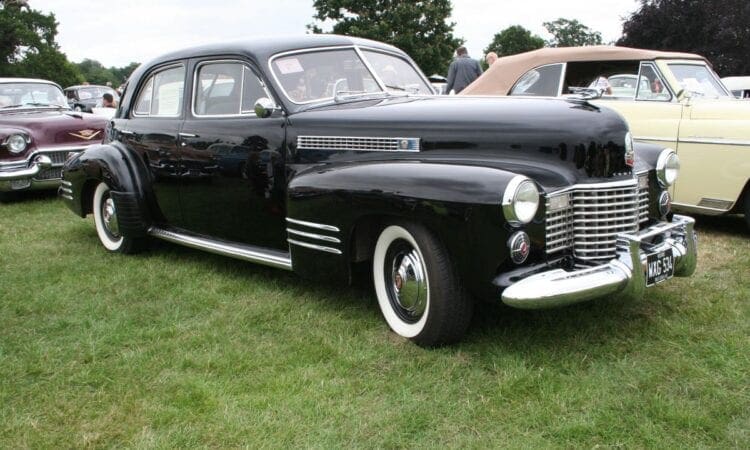 Having settled into Blenheim Palace over the last several years, it was all change again for the Pre-’50 AAC’s annual Rally of the Giants as the show site was moved slightly more into the main part of the park to make way for  a new Elizabethan theatre in the round. Luckily it wasn’t that far and the only real difference was not having the splendid backdrop of Blenheim Palace.

The cars started rolling in early and the Pre-’50’s policy of welcoming all American vehicles seemed to reflected in the sheer variety of types of vehicle on display. Obviously the club has been well known as the traditional home of vintage and pre-War cars, but increasingly there seem to be more and more Fifties and Sixties cars attending and even later models. Typical was Andy Green’s 1976 Mercury Marquis. Now, whether you like big Seventies boats or not, the condition of this ‘Tuna boat’ as they call them in the North Eastern seaboard states was really something to behold. Likewise, Ann and xxxx Mitchell’s 1979 Williamsburg Lincoln Continental Town Car was a great representation of late great Seventies Americana, with a stunning paint scheme and mileage still under 10k! Mike Churchill, who was in Car of the Year back in 2017 with his green Continental Mark IV, brought along his equally stunning 1978 Bill Blass Continental Mark V – It seems big Seventies smog-era Lincolns are very much in favour these days.

There were plenty of stunning older cars, which one would perhaps consider more usual fare for the RoG, including Vic Cheeseman’s 1931 Chrysler and Paul Moxham’s 1930 Chrysler 77 Royal Coupe, there was even a super rare Chrysler Airflow doing the rounds. Fresh out was Peter Rickinson’s 1949 Buick Roadmaster Sedanette – there was no missing that with its unusual metallic blue paint and another GM Stunner was Graham Saggers 1958 Cadillac Coupe de Ville which had a remarkable 14k on the clock.

The Rally of the Giants always throws up interesting and unusual cars and one such vehicle was the right-hand drive 1963 Rambler belonging to Ivor and Pauline Duarte from Gloucester. It replaced a 1970 Rolls Royce Silver Shadow they said had which had simply dissolved into rust – We’re pretty certain the Rambler will prove a more reliable and certainly much more inexpensive classic than the Rolls!

Was there a star of the show? There certainly was, a certain glamorous Italian starlet, a 1941 Cadillac Series 61 Five Passenger Coupe belonging to American-Italian Jeweller Nicola Bulgari, who was on hand to pick up Best Concours for the car. Had he driven the car from Rome, where it had been restored? No, don’t be silly! The car had been shipped, but it literally had crowds around it all weekend. It’s not very often you see a car of this calibre and we’re delighted that we’ll be featuring it in next month’s magazine… so we’ll save pour powder for then; all we can say is that this is one very special Cadillac that’s undergone a ‘money’s-no-object’ restoration. Nevertheless, the Bulgari Cadillac wasn’t the only visitor from overseas, as there was also contingent from Holland and Germany visiting the show in some very fine Cadillacs…

The Pre-’50 AAC committee are an ingenious lot, when the PA system packed up just as they were announcing that prize winners needed to come up to the club marquee for the prize giving it looked like they might be in a bit of a pickle. Not fazed, they came up with the ingenious idea of driving around the site in a Seventies Dodge Monaco Police car, using the loud hailer to summon the prize winners – and that’s the can-do spirit of this club, or as Churchill would’ve put it (Blenheim is his ancestral home after all,): they just keep b*ggering on!

Heat winner number five of the Kingstown Shipping & RH Insurance Car of the Year is this stunning 1955 Dodge Custom Royal Lancer, belonging to John Miller, who’s the editor of the Pre-’50 club’s magazine and a real enthusiast of early ‘forward look’ Mopars. With only 10 thousand miles on the clock, this Dodge is every bit the survivor car, with immaculate tri-colour paintwork and immaculate interior.

The drivetrain is a Super Red Ram 270cu in V8 motor and two-speed Torqueflite auto ’box, meaning it’s no slouch either. The only option added when purchased new was the Kelsey Hayes wheels, purchased by the original owner in June 1955 by Ronald Kukula from Fred Gardner & Sons in Chicago.