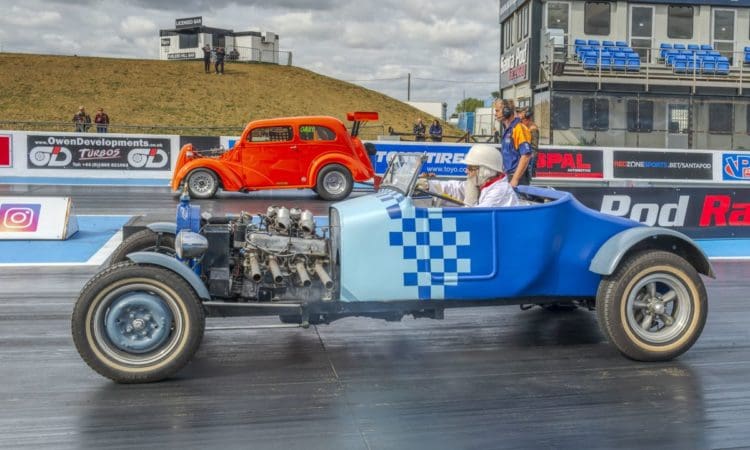 This year saw the 30th anniversary of the National Street Rod Association’s Hot Rod Drags, and with it the biggest change in its history following its move from Shakespeare County Raceway to Santa Pod. There’s no doubt that ‘Shakey’ was always a popular venue for rodders and racers, and there was much regret when it sadly closed its doors for good last year. So it was with interest that we went along the Pod, to find out how the Hot Rod Drags would fare at its new venue. With track time available on the Friday, many racers and spectators arrived Thursday, and this early schedule seemed to result in the Saturday being the busiest day of the weekend instead of Sunday, which seemed to have a much quieter feel, with many having packed up and left already which was a little disappointing.

The Hot Rod Drags has always attracted a whole host of specialist race series that have regularly attended over the years, at first they were added attractions, but have gained in popularity to the point that the weekend would be pretty sparse without them. The Wild Bunch, the Outlaw Anglia’s, the ever-popular Gasser Circus, and the relatively new Tri-Chevy Shoot Out all provided close racing and excellent value for money action over the weekend, with many running their final rounds for the season. Add in all the independent pre-’73 muscle car owners that show up to add spectacle and colour, and you can at least guarantee busy fire up lanes.

However, when you consider that the event was originally conceived by the Midlands-based ‘Gang of Four’ as a possible NSRA event, with it quickly being incorporated into the club’s annual event calendar, the idea of giving over a Run What Ya Brung weekend for the benefit of members who could bring along their rods and blast them down the quarter mile was a great idea.

Sadly, for reasons no-one can quite fathom, this opportunity has been embraced less and less by NSRA members over the years, especially when you consider the huge turnouts that regularly show up for static shown and shine based events such as the Fun Run and the Supernats. This was evident this year especially, with precious few pre-’49 hot rods joining the fire up road to take their turn. We hate to admit it, but the NSRA’s participation in the event seems more like a side show these days rather than what was once the core part of the weekend. Maybe, as in the USA, ‘Street Rodding’ has now grown so far from its original hot rodding roots that it has evolved to the point that it is quite a different animal these days.

We made a point of looking at social media online post-event to gauge the general feel of whether the move to Santa Pod was positive, and the general feeling was that it was, which can only be a good thing. Certainly, the racers we spoke to, appreciate the superior facilities and professionalism in the way Santa Pod is run these days, while nostalgia for Shakey mainly seems to focus on the intimacy of the old Kenny’s bar and the fun times after dark once the racing had finished and the cars were parked up. The addition of a party marquee beside the strip this year went some way to maintaining the social ‘feel’ of the Hot Rod Drags, and we’re sure Santa Pod will be watching and learning what makes this event special and improving it year on year. Here’s to the next 30 years!