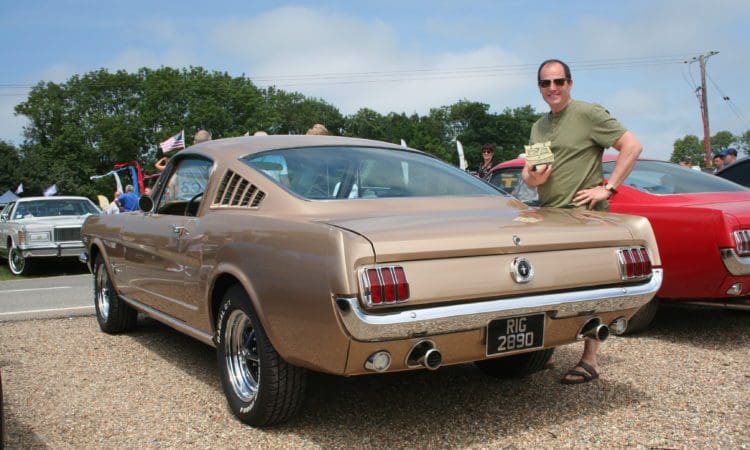 Classic American’s December issue was busy being printed whilst the Grand Finals of this year’s Footman James & Kingstown Shipping Car of the Year competition were taking place. Who was the lucky winner? Well, obviously we can’t tell you here, (although there will be an update on our website www.classic-american.com) but fighting it out for the prize of £500, a unique hand-cast brass trophy and the prestige of the title of Car of the Year were these seven superb heat winners!

The first heat winner of this year’s competition was selected at Wheels Day – The skies may have been grey and the weather chilly, but that didn’t stop Diego Presenza from bringing his beautiful white 1963 Ford Falcon Futura convertible to the show, along with his whole family for a great day out. Diego has painstakingly restored this Falcon over the years and it now looks like a new car. Fitted with Ford’s failsafe 170 cu in straight-six motor and three-speed manual, the car has had just about everything restored or replaced, with a stunning interior and shiny new paint. Even the tires look brand-new! The Falcon has spent time in both the Canary Islands and Barcelona, but is now residing in Richmond.

The second heat of this year’s Car of the Year competition took place at the American Speedfest VI event. Now in its sixth year, Sunday saw a big turnout of cars and visitors. As in previous years, there were plenty of Mustangs on display, but one in particular caught our eye, this stunning fastback in Champagne Beige. Owner John Maunder is an American who has been living on these shores for the past three decades and has actually owned the Mustang since he was 16, when he acquired it from his brother, after helping him extract it from a garage. The car was daily driven from the Seventies until 1988 when John moved to the UK and was laid up until 2014 when he decided to have the Mustang restored by Shasta Mustang Supply of Redding, California, who fettled its Deluxe interior, fresh carpets, paint and highly detailed 289 motor.

The Footman James Bristol Classic car show saw the third heat of the Footman James Kingstown Shipping Car of the Year competition, which was won by this stunning 1957 Plymouth Belvedere, belonging to Nick Parker from Bristol. The car had previously belonged to famed Bristol hot rodder Jerry Denning, who had bought it as an unfinished project.

Nick had first seen it in 2005, when it totally blew him away, but it took almost a decade until the opportunity arose for him to acquire it. Not a lot is known of the car’s history in the States, other than a dealer tag on the back from New York state. The car boasts a lot of its original interior, a 301 cu in V8 and of course that famous push-button transmission.

Say hello to the winner of the fourth heat of the Footman James & Kingstown Shipping Car of the Year competition which took place at the Classic American Stars and Stripes Show. The worthy winner – although it was a tough choice, so many incredible cars! – was this stunning 1957 Dodge Custom Royal belonging to Gary Sanders. And if you think it looks familiar, it was the cover car for the May 2018 issue of Classic American. This rare and beautiful beast boasts may features that seemed positively space age at the time, from a push-button transmission to an under-dash record player and a power convertible top!

Heat Five of the Footman James & Kingstown Shipping Car of the Year competition took place at Blenheim Palace, where the car selected as heat winner was this stunning right-hand drive 1938 packard 128 belonging to Dennis Smith from Gloucestershire. This stunning pre-War beauty is believed to have been assembled in Australia (it features a plate in the engine which says “Packard Australia”. Dennis has owned the car for six years, although it underwent a full restoration in Australia before departing down under for these shores.

Round Six of this year’s Footman James & Kingstown Shipping took place at the UK’s biggest muscle car event, the Mopar Euro Nationals held at Santa Pod Dragstrip. Sweltering heat gave way to gale force winds, torrential downpours and unsettled weather as the recent heatwave ended dramatically. Equally dramatic was the stunning black-on-black 1969 COPO Camaro which scooped the trophy for this heat. Belonging to Steve Henry from Berkshire, the car was purchased from Belgium and is super-rare, with its high performance L72, 425 bhp 427 cu in high performance V8 motor is backed up by a Muncie four-speed close ratio transmission and 140mph speedo. The car underwent a total restoration Stateside six years ago, prior to its importation to Europe.

The final round of this year’s Footman James & Kingstown Shipping took place at the American Autumn Classic held at Prescott Hillclimb. Winning the final heat was this stunning Silver 1964 Cadillac Sedan de Ville belonging to Graham Macdonald from Tenbury Wells. Whilst the car has undergone a respray, it’s the stunning condition of all the trim on this car and the interior which is really eye-catching. None of the chrome or mazac trim on the car appears to have been restored, yet there is virtually no pitting or deterioration whatsoever, something one would expect on most cars over half a century old. Likewise the interior is in original, unblemished condition and it would appear the car has never been smoked in, as both ashtrays an cigar lighters are unused.