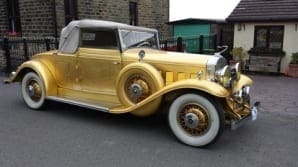 Visitors to this year’s Footman James stand at The Classic Motor Show may be forgiven for thinking the theme is a lovefest of the outlandish, lavish and extravagant as it unveils a classic car of monumental glitz as its 2015 centrepiece.

Reportedly owned by the flamboyant entertainer Liberace, the Cadillac represents a twist on the show’s theme of ‘She’s a beauty’; according to Footman James, beauty really is in the eye of the beholder!

David Bond, Director of Footman James said: “We are being a bit Liberace with the truth here, as the car was believed to have belonged to ol’ Walter.  However, regardless of ownership, it really is a bedazzling peacock and well worth a visit!  We would therefore like to encourage visitors to the show to pop by and let us know whether they think the Cadillac is either a beauty or a beast!”

In the 1970s the car was owned by a Jack Smith from Kansas who spent three years making it even more flamboyant; his efforts included dazzling white leather upholstery and driving lamps that move with the steering wheel.  It was later sold at auction in 1975 and then spent 12 years on display in a German museum.  Today it is owned by Cheshire based enthusiast Mike Radcliffe.