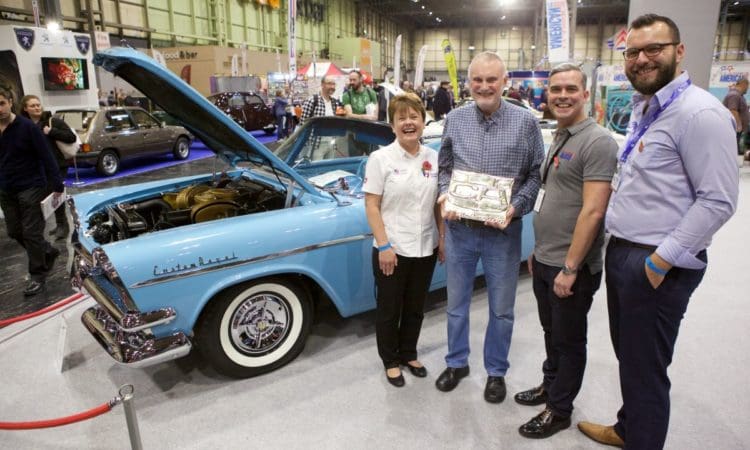 November is when, as classic car fans, we really know that winter is well and truly here. Apart from the initial horror of seeing the gritters out for the first time, it’s also when the last big car show of the year takes place: the Lancaster Insurance Classic Motor Show which is held at the NEC in Birmingham.

This final event of the year bookends the car show season for most people, most of whom won’t attend much in the way of car shows or events until the following spring. The NEC is a great location in terms of being easy for most people to reach, either by car or train and is even handy for Birmingham Airport, which is effectively on site. However, this year there were plenty of grumbles about the £16 parking fee (although it was still £12 if booked online in advance,) as well as the on-the-door ticket prices and the cost of food onsite; however, old hands brought their own picnics and sandwiches and ordered their tickets well in advance online for the considerable cost savings these measures offered – and some were even lucky enough to win their tickets in the competition give-away Classic American runs in conjunction with the organisers every year.

The American section was in Hall 5 again, where it’s been located for the past few years, with plenty of familiar clubs, faces and names on hand to give a good showing for the American car scene in the UK, with all the major clubs represented. As in previous years, there was plenty of American content sprinkled throughout the whole event, including the Meguiars Club Showcase stand which featured a customised 1958 Chevrolet Impala Coupe with a truly remarkable roof chop belonging Barry Craven from the American Auto Club International.

The Silverstone auction stand served up plenty of Americana, although a pair of Bullitt Mustang recreations caused the most stir, selling for £54 and £90k respectively. Keeping with the Steve McQueen theme, Silverstone also had the famous actor’s Willy’s Jeep up for sale, which closed at £84,375. Also of interest to Classic American fans were a Studebaker Golden Hawk that sold for over £33k and a 1927 Oldsmobile Model 30 that went for £16,650. Amongst the cars that didn’t sell however, were a 1963 Corvette Sting Ray and a rather lovely 1965 Chevrolet Chevelle Malibu SS convertible.

Classic American contributor Geoff Carverhill could be found promoting his latest book, ‘The Rootes Story’ on the Rootes Archive Centre stand in Hall 4, whilst even on the Simca Talbot stand, a remarkable time warp Dodge Omni could be found that was sold new to a French buyer in the Eighties. This amazing little car was fully loaded and boasted many Eighties styling cues like two-tone paint, thin whitewalls and boasted just about every option available back in the day – it was also immaculate. If you fancied a ride in an American car there was even an eye-popping yellow Seventies Camaro Z28 offering rides on the Sporting Bears enclosure, raising money for charity.

This stunning little Ford is a testament to Diego’s hard work to restore this car back to its original glory, something he did over several years whilst in the Canary Islands and Barcelona. Now residing in the UK, Diego drove the Falcon up to the NEC for the show and drove it back down afterwards – Now that’s enjoying your classic!

Surely one of the most interesting cars in this year’s competition was John Maunder’s… why you ask? A Mustang? Aren’t there lots of those around? True, but how many owners can claim to have owned their car since they were 16 and actually driven to school in it (with a team of cheerleaders in the back too!)? John can and you can read that amazing story in next month’s magazine…

Nick Parker is one of those lucky individuals who’s had a car in the Car of the Year Competition not once, but twice, this time with his stunning ’57 Plymouth Belvedere that has quite an interesting history in terms of having been owned by a famed local hot rodder from the Bristol area.

There was no missing Gary Sanders’ Dodge, with its flamboyant fins, lashings of chrome and dual rear antennae. A true showcase of mid-Fifties Mopar technology, it features everything from push-button transmission, to on-board record player and swing-out seats…But of course, it’s that high performance Hemi-headed D-500 moor under the bonnet that really sets pulses racing!

Packards are a rare sight here in the UK, but how rare is a right-hand drive one? Dennis Smith was lucky enough to get his hands on this right hookin’ beauty and wherever he takes it, it’s almost always the centre of attention, just as it was at this year’s Classic Motor Show. Although originally destined for Australia, this is one antipodean we were delighted to have on the Classic American stand.

If there was one car that was guaranteed to cause a stir wherever it went, that was Steve Henry’s super rare ’69 COPO Camaro. These were so-called as these cars were the result of very specific codes (COrporate Purchase Order) that were cunningly used to create probably the ultimate GM performance package of the time. Stunningly restored, this car was every bit the show-stopper all weekend.

Graham Macdonald’s Cadillac represents a real high watermark in terms of Cadillac’s engineering, quality control and styling restraint. This is one Caddy that wouldn’t have looked out place – superior even – to Rolls Royces, Mercedes and Jaguars of the day. It’s Graham’s first American car – what a great start we say!

And the winner is….

Three days of judging culminated in the winner being announced on Sunday afternoon with representatives from the competition’s sponsors: Julia Attwood from Footman James and James Hadley from Kingstown Shipping to hand over the trophy. Editor Ben Klemenzson was keen to point out the judging system used before the winner was announced, as many had questioned how such wildly different cars could be judged fairly. Ben explained:

“The cars on the stand are all very different. Some have undergone total restorations; others are largely original, survivor cars. The important thing to understand and remember is that the cars are not being compared with each other as that would be impossible as they are all so different; instead they are judged on their own individual merit…”

Ultimately it was Gary Sanders’ 1957 Dodge which took the win with most points overall and he accepted the winner’s trophy, along with a bottle of champagne and a cheque for £500. And so concluded yet another year’s Car of the Year; we’re already planning next year’s, so keep your eyes peeled in upcoming Classic Americans for exciting details about Car of the Year 2019!