The International Organisation of Professional Drivers (IOPD) will once again be supporting the 2017 British Drag Racing Hall of Fame (BDRHoF) Annual Awards Dinner being held this year at the Oatlands Park Hotel, Weybridge on November 18th. And we are pleased to announce that Ron Hope of Rat Trap Racing has confirmed that he too is renewing his sponsorship of the event.

The IOPD was formed in 1990 to regulate and support the driving experience sector of recreational motor sport in the UK. It was brought about by the MSA/RAC refusal to recognise and permit ‘Run What You Brung’ events and track driving activities thereby denying participants and organisers a route to legitimisation and parity with main stream motor sports.

The IOPD soon grew, facilitating events for some 70,000 to 100,000 participants each year – not only for driving experiences but for full competition and Drag Racing. The IOPD also permits many of the world’s international motor manufactures driving experience programs and track days. A visit to their website www.iopd.org.uk will explain all.

Heading up the IOPD is Steve Murty who said, “We are very happy to support the British Drag Racing Hall of Fame Gala Awards Dinner for a third year. It is a totally non-political impartial organisation that is dedicated to recognising and celebrating those people that have contributed so much to create the sport we can enjoy today”.

Steve also operates York Raceway with his son Chris. He said, “The Hall of Fame embraces Nostalgia – something that has always been a part of the York Raceway culture and in association with the Pennine Drag Racing Club we have been instrumental in developing several of the classes that have become part of today’s national Nostalgia scene. But as with some other drag racing and sprinting tracks in the UK, there are some tough battles ahead before we can ensure our survival.

This year is our 40th anniversary and racers can help by supporting our meetings – particularly the August Bank Holiday 7th Annual National Hot Rod Reunion that will mark our official birthday celebrations. It will be great to see the return of those that have burnt rubber on our track during our 40 years history. We plan a real northern welcome and it will be a party”.

Information about this meeting can be found www.yorkraceway.org.uk

BDRHoF Stu Bradbury said, “York Raceway and the Pennine Drag Racing Club have been strong supporters of the BDRHoF since it was formed in 2006. They have provided a focal point for the development of drag racing in the North of England and long may it continue. UK drag racing would be a poorer place without it”. 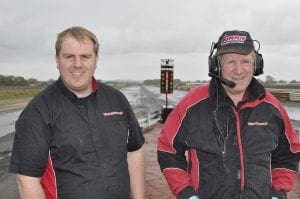 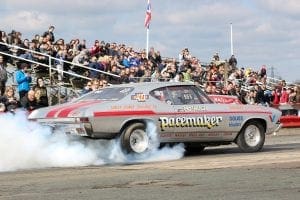