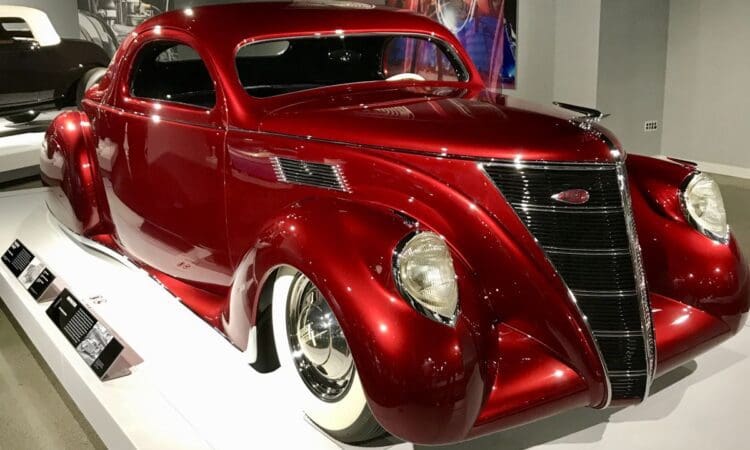 With a bit of luck we might be able to fly to the US again by the end of the summer – If Los Angeles is on your itinerary, then make sure you include the Petersen Museum for a very special exhibition that’s been extended due to the pandemic. Keith Harman explains why…

We had already made plans back in January 2020 to travel to California to take in the Grand National Roadster Show etc, when we had an e-mail from our expat friend in Pomona, Tony Thacker, inviting us to a special reception evening at the Petersen Automotive Museum in Beverley Hills. Tony has been resident in California and involved in the hot rod scene there for over thirty years, so usually has his finger on the pulse of anything cool going on there. The Petersen has had somewhat of a makeover in recent months, with dynamic new displays designed to broaden its appeal and keep things fresh.

The invitation was to a preview reception to a new exhibition opening in the museum, dedicated to showcasing the car collection of one of the biggest names in rock music today. It’s well known in California car circles that James Hetfield, the front man of Metallica, one of the biggest rock bands in the world, is a major-league car guy and, as if you needed any proof, look no further than this jaw-dropping collection of automotive creativity. This was the first time that Hetfield’s collection of bespoke customs had been displayed all together for the public, the museum naming the event “Reclaimed Rust: The James Hetfield Collection”.

Alongside his mega-successful music career, Hetfield has always been into modifying and building cars and at one time owned around 40, all of which he had great plans for. Realising he could never build all of them, he thinned the herd down, with the 10 cars in the exhibition being the cream of the crop. It’s an interesting group, with a couple of surprises. It’s obvious that he has an eye for the swoopy art-deco stylings of the late Thirties, best represented by the five cars built by, and with, Californian custom stylist and TV personality Rick Dore. Dore, however, has taken these cars to the next level, sometimes starting from just drawing, and hand-crafting them cars into rolling metal sculptures.

The ’53 Buick Skylark, known as ‘Skyscraper’ was the first collaboration between the pair; the car being displayed with matching guitar and amp in true rock- star style. The chopped ’37 Lincoln Zephyr Coupe ‘Voodoo Priest’, leads on to the two more exotic interpretations. The ’34 Packard named ‘Aquarius’ features a completely hand-formed body by Marcel’s Custom Metal, with its faired-in wheel covers, it was inspired by both a ’38 Delahaye, and the work of French Coachbuilders Figoni and Falaschi. The ’36 Auburn, on the other hand, was built from a derelict, fibreglass, second-generation Auburn Speedster 852; a project originally developed in the 1960’s. The car was displayed at the Goodwood Festival of Speed in 2010.

We said there’s a few surprises, and no more so than another Rick Dore creation ‘The Black Pearl’, a styling interpretation based on a ’48 Jaguar. It, too, features a wild one-off body by Marcel and Luc De Lay −  there’s maybe a little of the original Jag left in the car, but not much.          Just to show that The James Hetfield collection isn’t all high-end European-influenced stuff, the purity of his ’32 Ford Roadster ‘Black Jack’ shows his appreciation of early American hot-rod history; the timeless Deuce being built by Josh Mills, using an original steel ’32 Ford Body, and with no part on it built later than 1949.

On the night, we were able to photograph the cars before James Hetfield sat down with Museum Director Terry Harges for an informal ‘fireside chat’, (available to view on YouTube) followed by a charity auction. The exhibition was then officially open on February 1, and is now currently still running at the Petersen. We also hear that the exhibition will later tour other US cities in the future. If you’re in the Los Angeles area this summer, make sure you check it out.

Our thanks to Tony Thacker and the Petersen Museum for the Press accreditation.