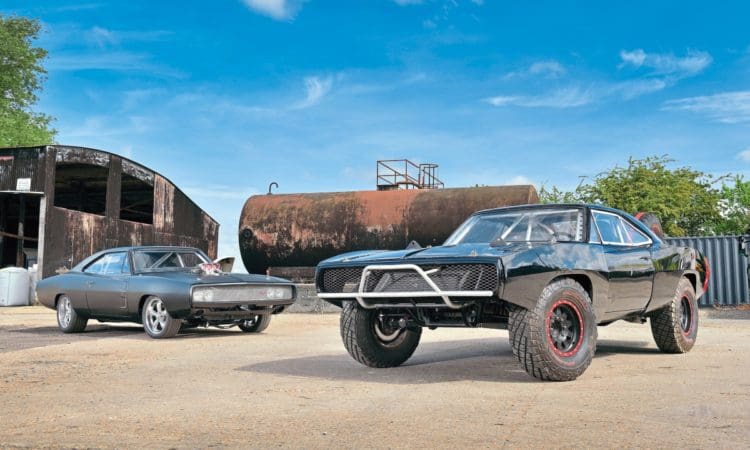 Two very different Dodge Chargers from two Fast and Furious films. We find out what it takes to build an authentic movie car…

Although hardly the most realistic of car films, the Fast and Furious movies – the ninth is due for release in 2020 – have done much to educate cinema-goers about our sort of cars.

Virtually everyone is aware of the classic Dodge Charger thanks to their on-screen appearances and the 1970 Charger is the car most connected to lead character Dominic Toretto, played by Vin Diesel. Greg McNair of Outlaw Muscle Cars recently imported two Dodge Chargers with close ties to the F&F films.

“It started when two UK-based enthusiasts, Bobby and his brother Raj, wanted to acquire Fast and Furious cars,” explains Greg.

“The request was put to my business associate Matt Koops who runs Muscle or Performance Auto Restoration in Florida and together we assisted the brothers in getting two suitable cars to the UK.”

Matt takes up the story: “I agreed with Raj we’d build him the flat black Charger from F&F4 since it’s only in the movie for a few minutes and is rarer than the others. If he ever gets tired of it we can spray it gloss black, change the wheels and he’ll have a new, different, Fast and Furious car. To create it I worked very closely with the team who built the actual cars for Fast and Furious 4.”

That not only ensured authenticity, but also helped Matt buy parts directly from the same manufacturers who had supplied the movie crew.

“The build was a carefully detailed process to construct a very accurate build. The body came out of my collection of Dodge Chargers.”

The Charger retains its original VIN so we know it started life as a 383cu in, four-barrel, 1970 Charger built in Missouri.

“It was a very used rough but complete car which had been drag raced,” continues Matt, “so needed extensive metal replacement and restoration. The frames and basic structure were in great shape since it lived its life in Florida, but the outer skin of the car had to be replaced.”

One of the few differences on this build compared to the original movie cars is its all-steel body.

“All the F&F Chargers have fibreglass fronts since no-one in the aftermarket makes reproduction front sheetmetal for 1970 Chargers,” explains Matt.

“The movie crews needed replacement panels so made their own moulds off the original steel panels. We did a top and bottom rotisserie restoration, I used high-end PPG paint products, two-stage paint and paid attention to body lines and gaps. Movie stunt cars wouldn’t be that nicely finished.”

New old stock 1970 Charger quarters were used and many hours of bodywork and block sanding were performed by Marlon Mendonca at Meosch Motorsports, who handles paint and bodywork on Matt’s builds. The black paint was used with a satin clear.

“The wheels, seats, shifter and dashboard are leftover F&F parts, the rollcage is an exact duplicate. It’s painted Mercedes silver base and clear coated. That aluminium interior was copied off the original cars from the first five movies. That was also done by Marlon, he did the custom F&F grille too.”

In addition to installing the roll cage, Matt sourced all of the original parts and did everything mechanical on the build. Speaking of which, the engine is now a 1972 low-compression 8.2:1, 440cu in with a Hughes camshaft that was custom-ground for the BDS 8-71 supercharger running 4-5psi of boost.

Stainless braided fuel lines run throughout with a custom fuel regulator/bypass system specified by FAST engineers. The fuel filler cap on the rear wing is one of few parts that remain original.Exhaust duties are handled by ceramic-coated headers and Flowmaster three-inch pipes. The gearbox is a 727 with reverse pattern, manual shift valve body, deep Mopar pan and a TCI 3500rpm stall converter. Out back is a Mopar 8.3/4-inch rear end, with 3:91 gearing and a Sure-Grip Posi, powder-coated in correct black finish.

Keeping things cool in our English summers are an aluminium radiator with computer-controlled cooling fan. New glass was fitted throughout and the original bumper rechromed.

“All the exterior trim and emblems are new and fitted in the movie car locations,” explains Matt.

“All the Fast and Furious items we had to build were carefully watched over by the original builders of the cars. We didn’t do anything that wasn’t correct, although authentic assembly line inspection paint markings were added for a touch of originality.”

On screen, off road

The other Charger is a genuine on-screen movie car. “This off-road Charger is the green screen car from Fast and Furious 7,” explains Greg. “It’s what you see Vin Diesel driving in the movie and was car number four.”

While building the Fast and Furious 4 Charger Matt and Greg were in regular contact with the builders of the F&F cars, “one day they mentioned that one of the two surviving off-road Chargers may be for sale…”

According to its VIN this one began life as a Premium 1969 Charger with a 318cu in V8 and two-barrel carb, it was built in Michigan.

“The story goes this car was the prettiest, best build to come out of the shop and the guys didn’t want to see it destroyed,” continues Greg, “so they purposely didn’t install an engine or transmission so it wouldn’t get used for stunts.”

Instead, they pushed it into the studio to be used for green screen/CGI use.

“That’s where it remained until completion of filming Fast and Furious 7. This car had the most seat time of any of the Chargers due to the excessive use of CGI. Once post-production and editing were done, they pushed it off the set and installed an LS3 and TH400 from a wrecked car, likely one of the other off-road stunt cars.”

Yes despite what you see on screen – and that Hemi stripe on the tail – Chevrolet engines tend to be used in all stunt vehicles simply because they’re strong and easy to get parts for when something breaks. This Charger is two-wheel drive and has a fibreglass 1970 front end, widened by using two wings grafted together.

The rear quarters and boot lid are also fibreglass. The 16-inch Method wheels and General Grabber tyres are Baja Trophy Truck type and the chassis was apparently previously under a competitive Arena Truck.

Now the story gets even more interesting, “The body is an original General Lee used in filming the original Dukes of Hazzard television series in 1979,” says Greg. “It was a jump car. When they wanted to build the off-road cars for F&F7 all they needed was bodies – no frames, drivetrains or floors – so they could drop the Charger bodies on to the truck chassis.”

They contacted an old friend who’d saved all sorts of vehicles from the 1970s and ‘80s including a bunch of old General Lees. He had only very rough cars, perfect for this build.” Of course I needed more information about this and quizzed Matt.

“I spoke with my contact regarding the bodies bought for the off-road car,” explained Matt. “They bought four old General Lee bodies from a fellow named Darrel. He has a wrecking yard of old movie and television cars out in the desert. He’s a very quiet, secluded fellow who does not want his last name or location revealed. Of those four Charger bodies this, supposedly, is the only one that survived. This is not just rumour, this car was a General Lee used in filming the 1979 season and was a Dukes jump car.

“It did make it on to screen and was not just a practice car. Any paperwork received from Darrel has been kept by the F&F car builders. They keep a file on every car they buy, build or use, that documents where it came from, condition, build, what it did on screen and what happened to it after filming was done.

“This car was a General Lee, the holes that held the vinyl top trim that were Bondo’d over can be seen though the paint. All original General Lees were vinyl top cars with the vinyl top removed and the trim put back on.”

“After the Fast and Furious 4 duties were done it was eventually sold to a collector and close friend of the crew where it remained in his ownership until Matt purchased it,” says Greg.

“Once at Matt’s shop I performed routine maintenance, rebuilt the brakes, optimised the springs and shock valving, and made it safe to drive. It lived in California for quite a while after the movie was released,” adds Matt, “making occasional public appearances and running around the desert from time to time.

“It was in pretty good shape, the movie guys did a very good job building and maintaining it, however, it had storage disease. A good buff, clean and those mechanical items and she was ready to go.

“We’ve given it a thorough cleaning and inspection. The car is now in great shape and is a beast. It swallows up bumps with ease, and is surprisingly easy to drive.

“Later on, I installed lights front and rear wired into unused switches on the centre console. One thing I didn’t do was replace the red straps that hold the spare tyres in place. I got replacement straps from the original supplier – they were left over from the movie as well – but never installed them because those are the original straps seen in the movie and need to remain on the car.”

So there we have it. In spite of the number of Dodge Chargers wrecked on screen we know there are two here that will remain preserved in excellent condition with owners who say they would not ever consider selling them.

A black 1970 Charger is introduced in the first film, The Fast and The Furious (2001) as lead character Dom’s father’s car.

After a chase it is wrecked in a roll-over following a street race. In Fast & Furious (the fourth film of the franchise released in 2009) Dom’s girlfriend Letty is seen rebuilding the car. Among other alterations it now has a mesh grille.

Dom uses the car throughout the film before crashing it in a tunnel near the end of the movie.

What is presumably a near identical replica then reappears right at the end of the film and that Charger is used to free Dom from a prison bus at the beginning of Fast Five (2011) later this Charger gets, presumably, destroyed again.

Furious 7 (2015) includes a black ’70 Charger converted into an off-road vehicle which Dom then wrecks when he drives it off a mountain.

Later a black 1970 Charger that looks very much like the previous supercharged car (should that be cars?) right down to the mesh grille, appears and crashes into an Aston Martin before being crushed (maybe) when a multi-storey car park collapses.

Will the black Charger re-appear in future films? I virtually guarantee it…