The penultimate heat of this year’s Footman James Car of the Year competition took place at the Atomic vintage Festival at Sywell in Northamptonshire over the weekend of August 19 & 20th . If ever there was an American automotive icon, then this 1957 Chevrolet belonging to Daniel Springall is definitely it – and this particular example, in its stunning red paint and with contrasting black and silver interior is a mighty fine example.

And if the eagle-eyed amongst you think it looks a little familiar, then that’ll be because we featured it in Classic American six years ago (in the June 2011/CA242 isssue,) when it appeared with Dan’s father’s 1967 Impala. Dan bought this ’57 from a dealer in Kenosha, Wisconsin, although it had belonged previously to a 75-year-old who’d only just given up driving. The car was restored in the early Nineties and it’s remarkable how good this 20 year old paint job looks even to this day.

The original buyer specified a Wonderbar radio, which was a $112 option, but no power-steering or brakes (which both would have cost about the same as the radio!). The V8 motor for ’57 was the 265 cu in V8 and Dan’s car is fitted with Chevy’s two-speed Powerglide automatic transmission. With its hardtop styling and iconic lines, Dan’s Chevy will definitely be adding some Fifties pizzaz to the Classic American stand at this year’s Classic Motor Show, held at the NEC over the weekend of November 17 – 19th  – Make sure you come and check this and all the other cars out on the Classic American stand in Hall Five. 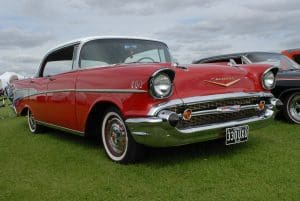 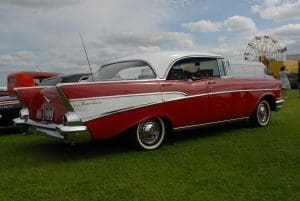 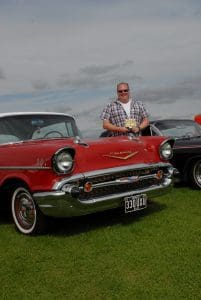