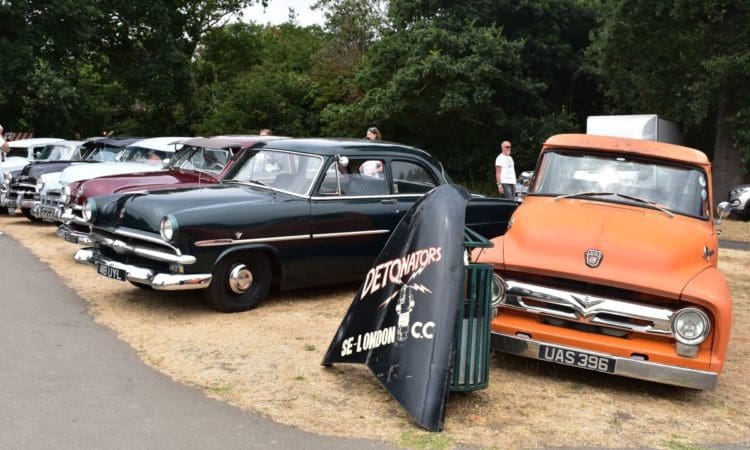 Believe it or not, a fun, laid-back day out with cool cars amidst the smoke and congestion of London is not quite consigned to the realms of fantasy. Though it sounds about as likely as a fairy godmother popping up to turn your pumpkin into an Eldorado, the hard-working men and women of the Detonators Car Club make it a reality – at least for one day of the year, anyhow, with their annual BBQ.

The venue is Oxleas Wood Cafe, a small cafe in Shooter’s Hill in the south-east of the region perched on the crest of Oxleas Meadows with fantastic views south into Kent, its appearance belying its proximity to the South Circular and the dirty old city beyond. Also out of keeping with the land of five-pound pints is the fact that entry to the show is completely free, expenditure being completely unnecessary unless you fancy partaking in the beer ‘n’ burgers laid on by the cafe.

With a flawless formula like that, it’s no surprise that over 70 cars, almost entirely American or British and pre-1980, though a few Vee-Dubbers also joined in, braved the London traffic for the show. Since the Detonators are primarily a traditional hot rod, custom and Fiftis car club, it’s no surprise that a large chunk of the show was comprised of such cars, and the club’s enthusiasm for the Fifties extended to having two lively bands providing extra entertainment throughout the afternoon. The Doggone Honkabillies belted out rockabilly from the main stage by the cafe, while banjoist Flatfoot Johnny and the Wandering Rhythm played authentic bluegrass from the bed of a ’54 Chevy pick-up.

A walk around highlighted some interesting trends, with late Forties and early Fifties patina cars and mild customs vastly outnumbering the more familiar but gaudier models of the late Fifties. Hot rods encompassed both budget ’glass builds and some steel ones, with a trio of VHRA-standard Model As corralled in one corner. Just next to them sat a cool Falfa-style ’55 Chevy while away from the traditional customs you could take your pick from a super-clean, stock ’66 Pontiac GTO or a mean ’70 pro-streeter. A full-blown custom van, the ‘Black Pearl’ ’75 Chevy Van, also stood out. It’s been around a few years now but manages to get cooler with each appearance.
Since everyone seemed to enjoy themselves this year, no doubt the BBQ will be back again – just be sure to keep your eyes peeled, because a hidden, independent event might slip under the radar if you’re not careful.