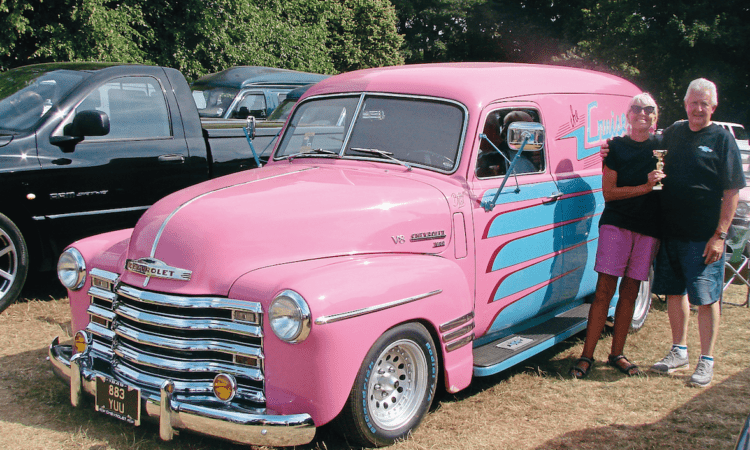 Here’s a seasonal story with a happy ending. It was winter when Paul and Marion Marsden fell in love with this Chevrolet 3100 panel van. They loved it from the moment they clapped eyes on it; here, in their own words, is how this love of a unique commercial vehicle came about…

It started early in 2013 with our 1929 Ariel motorcycle which we transported to meetings in a Ford Connect van. We had been talking about changing the van for something a bit more interesting and, having attended American car meets with a friend and his day van, we thought we could combine both vehicle interests by having an American vehicle to transport our British motorcycle.

One dull Saturday morning in January, we went on to an American website to have a look at what was available. We initially thought a pick-up would be ideal, but when this Chevy 3100 panel van came up, we knew it was the one. We couldn’t speak to the seller in Florida until Monday but he then sent numerous photos of the van and, even though we knew we were taking a chance, we became the owners on February 7, 2013. We knew nothing about importing a vehicle but slowly worked through all the necessary steps: the paperwork permitting the vehicle to leave the US, followed by delivery to the docks, crating and shipping to the UK. All this was achieved without any problems using the services of Ron Fenton at STS Imports (01245 363800/ www.stsimports.co.uk) who sorted the import paperwork and even had it registered with the DVLA before it arrived in June 2013.

In the glovebox were two letters from Freddy Chatman, who’d given the van such a distinctive paint job. We decided to ring him in the US to see if he could provide any history on the van. He was surprised when we said we had the van he’d painted, explaining it had been owned by a drummer in a Louisville rock and roll band called The Cruisers and the van was used to carry his drums. Freddy told us he was good friends with the drummer and would contact him to pass on our details. It transpired that the drummer, Ken (Dixie) Hancock, had married an English girl and moved to Liverpool, where they still live. Dixie contacted us and has given a complete history of the van, from when he bought it in the Eighties until he sold it in 1998, when his job moved him out of Kentucky.

Dixie bought the van to make it easier to transport his drums, but in 1991 decided to have it painted as the group were gaining in popularity. The Cruisers were due to play at the Kentucky Derby Festival, a major horse racing event. The festival colours were pink, teal (turquoise) and red. Dixie wanted a strikingly different look to his Chevy and, with Freddy, designed the customised paint job using the colours of the festival and The Cruisers logo.

The Cruisers used the newly painted van as part of their act, driving on to the stage in it and emerging with their instruments.

Dixie was very emotional when he saw his old van as he’d not seen it since he had reluctantly sold it. Freddy also saw the van in 2018 as he came to the UK on a visit and was almost speechless at how good it still looked.

Three years of fettling
We found some work needed doing and, as this was our first time restoring a vehicle, we took the van to North American Motor Co. (01252 515750/www.namcoamerican.com ) to have a parking brake fitted. Billy of NAMCO gave the van a thorough inspection and found a number of issues needed attending to. The rear suspension had to be improved by removing the leaf springs and fitting a ladder suspension, coilovers and panhard rod.

We decided to have a new Ididit steering column fitted with gear selection on the floor (it’s what we think an old van should have anyway). A new petrol tank was fitted in the space previously occupied by the spare wheel (we later increased the capacity of the new tank to maximise the range) and the exhaust was rerouted out of the sides as the new rear suspension was blocking the original route; it also makes it sound better. The actual job of fitting the park brake didn’t happen, but the van was returned to us very much improved from the work.

The driver’s seat cover was in need of attention, so we decided to have the seats reupholstered and Steve from Valley Custom Trimming (01264 350442) did the work. We initially intended to just reupholster the seats, but as with every job, it just grew. The cab roof was lined and new door panels fitted. In the rear area of the van, upholstered side panels were fitted and the roof was lined to match the cab roof.

Late in 2013 we moved the van on to our back lawn, bought a cover and over the next three to four years it was our turn to continue the restoration. We stained the floorboards black and applied several clear polyurethane varnish coats to help withstand the wear and tear of the motorcycle being put in and taken out of the van, fitted a handbrake, replaced the two instrument gauges and fitted a new cab heater which was smaller, looked better and was more efficient than the original.
The radiator was re-cored to help cooling. We further improved the cooling system with the addition of a header and expansion tank, plus a flex fan was added to reduce drag on the engine. We also fitted an electric fan as an extra precaution.

We then turned our attention to the electrics and Car Builder Solutions (01580 891309) provided a complete fuse/relay board which allowed us to rewire the whole vehicle, adding new headlights for the correct dip direction, indicators and fog lights. We designed and made new rear lights. The original windscreen wiper drive was vacuum, which even when working wouldn’t provide efficient rain clearance, so was replaced with an electrical motor. The Chevy small block seemed to have a running problem but a new distributor and four-barrel carburettor seemed to improve the problem.

A new chrome grille was fitted to smarten up the front end and some of the chrome trim (of which this vehicle has plenty!) was replaced. We decided to put it through its MoT even though it isn’t a legal requirement and were delighted when it passed.

Our finishing touch was to fit decals (which we had made in the style of the font of the original artwork) with the name ‘Betty Lou’ – the name Dixie originally gave the Chevy when he first bought it.

Finally finished
We attended shows in 2018 and the whole experience was great fun, despite a couple of necessary roadside repairs. The first was when both windscreen wipers flew off in torrential rain en route with the bike to Beaulieu. They are now firmly pinned in place. The second was midnight on a journey home from Liverpool when all the lights failed due to a broken wire.

We thoroughly enjoyed our first season and had the added bonus of gaining two trophies for Betty Lou.

Unfortunately the engine seemed to be using almost as much oil as petrol, so a local mechanic who specialises in American vehicles (Vince Gibbs Classic Cars 07500 864980) removed the engine. Repair wasn’t an option so Vince called up some contacts and luckily discovered a drag racing friend was changing a Chevy small block he had in a Ford Anglia for a big block.

We decided, as the gearbox was out, to complete the job by having this overhauled (Alders 01323 848448/www.aldersautomotive.co.uk). Vince fitted the new small-block engine and gearbox and added a high flow water pump and ceramic coated headers to further improve efficiency ready for the 2019 season.

It seemed strange driving without seat belts so Vince fitted mounting points – now we feel safer and it helps to keep us more secure on the slippery seats.

To date everything has been perfect and Betty Lou is running faultlessly. We now have excellent oil pressure and good water temperature steady over the whole journey with only the fuel gauge visibly moving in a downward direction. We don’t intend to change the wonderful paintwork on the van, so are currently trying to match the colours so we can touch up chips and scratches.

Some people may regard our vehicle as only a van, but it gives us lots of fun. We get to meet so many lovely people at shows who are so interested in the history of our van and its story. This year again Dixie and his wife Cathy joined us at Tatton Park with their stunning Harley-Davidson. Our story came alive as we were able to introduce Dixie, the original van owner, to those who were interested.

Our display was further enhanced as Dixie has given us an original T-shirt and some jackets that The Cruisers wore in the Nineties on stage. We intend to carry on enjoying our American classic for many years to come!