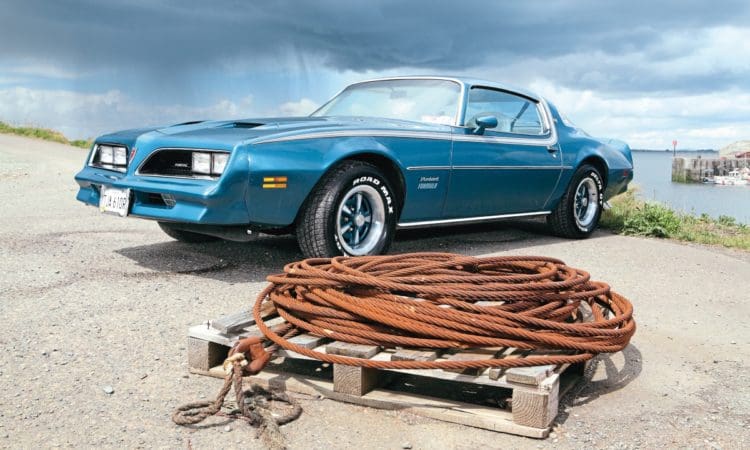 The mid-Seventies are often decried as the era when the American auto industry really started to lose its way; however, there were still some pretty impressive cars rolling out of the showrooms, as this 1977 Pontiac Formula proves.

Most people’s first experience of the Pontiac Firebird was in the Smokey and the Bandit movies; the black Firebird with the large eagle motif on the hood giving law enforcement the runaround while crossing state lines.

It was a ’77 Trans Am special edition that actually featured in the 1980 movie. And so it was that I found myself up on the border in County Louth, Southern Ireland, to meet with Mick Levins and his 1977 model Firebird. The movie, let’s face it, helped to put this car well and truly on the collectors’ map. The Trans Am took its name from The Trans-Am Road Racing Series established back in 1966 by the Sports Car Club of America.

It has been the Americans’ love affair with big sports coupes which saw the production of this car in its various formats run from 1967 through to 2002 and what we have here is a second-generation model that evolved from 1970 through to 1981, during which time this superbly designed sports coupe was developed.

If you ask a lot of people to draw their idea of a muscle car, then it’s highly likely that it will look like this. And that’s no surprise, as it was built to go head-to-head with the iconic Ford Mustang.

The ’77 model was the first of the sloping V-nose models with the four square headlights set back, having previously shared the same twin round headlights with the Camaro on earlier models.

Moving up to the hood, the visual signs of a powerful car come in the form of the two air scoops cut into the hood, not over the top, but enough to channel the air into the engine bay. The air scoops were all part of the limited edition ‘Formula Package’ which also included the Formula graphics.

The aesthetics of this car cannot be doubted, with its pristine cream leather interior and petrol green carpets complementing the exterior paintwork. This is a 2+2, with the rear seats being single seats separated by the central tunnel which allows for the rear wheel drive shaft.

The Morrokide leather interior has stood the test of time well and it’s the thought that went into these cars that makes the difference; things like the colour-coded 14-inch Formula padded steering wheel and steering column. Then there’s the brushed aluminium instrumentation panel with its big clock and speedometer, described in the sales brochure of the day as “rally gauges, clock and tach”.

The curvaceous bodywork is by Fisher, and the curves run smoothly, making the transition from the front spoiler through to the rear boot spoiler. A single racing stripe runs from the top of the rear door pillar and tapers off the front wing.

On the day I photographed the Firebird, the skies were dark and moody and the car just lifted out from the gloom and rain squalls. No matter what angle you view the Pontiac it just screams: “Drive me!”. What appeals to most people about this car is that while it looks and sounds stunning, it’s in a state of ongoing preservation and has all the little telltale signs of use that give it character.

The rear lights are a triple-strip affair which give it a distinct look, nestled below the full-width curved spoiler. Curves abound on this car, with the rear window wrapping around and making for a light and airy interior. It’s the little touches that count, such as the twin exhausts popping out below the rear side panel leaving the rear view uncluttered. Trust me, the car needs those twin exhausts to vent that 5.7-litre V8.

The car runs on RTS radial tuned suspension. There is great debate as to who actually first came up with this; was it Pontiac or was it Holden in Australia? The thought behind it was to tune the spring rates and shocks to allow for the growing use of radial tyres which were increasingly being used by the mid-Seventies, especially by General Motors. The intention of RTS was to reduce vehicle roll when cornering, along with increasing overall stability and handling of the car.

The 5.7-litre block lays the power down via a three-speed automatic floor shift transmission. Subject to availability and production requirements, the V8 could be drawn from stocks of Oldsmobile, Chevrolet, Buick or Pontiac. This particular car has the benefit of the V8, being a rarer 350cu in as opposed to the more common 400 cu in, and carries the ‘Formula 400’ sub-brand which made up a total of 21,801 cars from the 1977 production run. The 350cu in option puts out about 180bhp.

For a car of its size, it’s pretty nimble, hitting 60mph in a respectable 9.3sec and capable of covering a quarter mile in 16.9sec at an average of 82mph.

This Pontiac is a real head-turner and picked up an award in the Best 1970s Automobile class at the Classic American Car Show at Tatton Park, Cheshire, in 2016.

With total production of the ’77 model variants topping out at just under 156,000 cars, you still have a chance of finding good examples, but perhaps not as good as this Formula 400 – I’m guessing that you may have to pay a little more than the original screen price of $5450 back in 1977, a time when the average salary was around $15,000 per year.