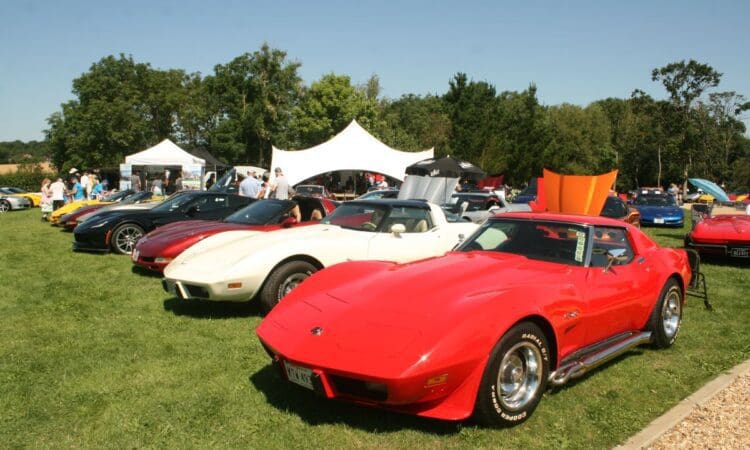 After a gap of two years due to Covid 19 and lockdowns, the CCCUK (Classic Corvette Club UK) once again returned to the Sharnbook Hotel, Bedfordshire, for their annual jamboree to celebrate all that’s best about this legendary marque. For many ’Vette heads’ it’s a weekend to celebrate and enjoy Bowling Green’s finest. On Saturday there was a run out to Santa Pod, only a stone’s throw away, to watch the drag racing. This was followed by the club AGM back at the hotel, followed by the evening dinner, a charity auction and talk by the Keech Hospice, followed by socially distanced dancing, with music provided by DJ Rob Haston of Petrol Head Art. Owner of the hotel and avid car enthusiast Ciro and his staff certainly did their very best to accommodate the CCCUK under difficult circumstances.

Fortuitously the Nationals this year was held in the middle of a heatwave, great if you like it blisteringly hot, not so good if you don’t! So, Sunday morning early arrivals found a shady parking spot at the front of the hotel, or on the top field, or at the back of the hotel. Along the front of the hotel there were Corvettes parked in line, representing all the different generations from the first C1, right up to the very latest C8. The latter, a 2020 example, was owned by Paul Bradley, who took delivery only two months previously and was still waiting to get the car officially registered. Finished in dazzling red paintwork, it certainly cut an impressive dash, as did the official UK GM RHD C8 which made a fleeting visit for a couple of hours later in the morning and attracted ’Vette heads like bees around the proverbial honeypot!

There was a very good attendance of Corvettes this year, with 160 in total. By lunchtime, many later arrivals found parking space to the rear of the hotel. There were many familiar faces, with a good many CCCUK stalwarts bringing their cars along, year after year, no matter where the venue. I’ve been covering this event since the heady days of Knebworth, for far more many years than I care to remember, but it’s always a great day out and a chance to renew old acquaintances. Some of the very first generation cars included CCCUK Membership Secretary Rob Tring’s 1959 model, resplendent in red with white coves (courtesy of Zak at Calbrook Coachworks, Bookham) (Leather upholstery and trim by Joe at Unique Auto Trim) and now running a 327cu in engine, which replaced the original 283cu in.

Another early C1 was Mike Lacey’s 1956 Roadster, once a long-term resident in a private collection in the US and previously the subject of a full feature in Classic American (July 2020 issue). Mike also brought along his 1963 Split window C3, which has been the subject of many upgrades and finished in the eye-catching colour of Tango Mango, also colloquially referred to a Toxic Orange. For 10 years Mick Lambert displayed his C1 Roadster at the Nationals, but late last year he purchased a 1966 C2 Coupe, finished in Nassau Blue, from the USA and the subject of much expenditure, it was making its Nationals debut. Work completed in the USA, included new wheels and tyres, glass, Vintage air-con and power-steering.

Another car making its National’s debut, was Mick Yorke’s 1977 C3 convertible, greatly modified and upgraded for performance and handling, built to race car specifications, with US Championship winning provenance, but still looking pretty stock on the exterior. It naturally drew plenty of interest and a full feature on this car will also appear in Classic American in an upcoming issue. Last of the C3 body styling was represented by several 1982 Collectors Edition models. Perhaps the most radical C3, in body terms certainly, was Barry Jibrall’s 1978 C3 sporting a Greenwood Daytona bodykit, which is a continuation from the original four or five examples made by Ralph Eckler.

Another interesting C3 was brought along by Stuart of American car specialists Carrot Town Garage, a Sportwagon. Greenwood Racing reckoned they could improve upon the original unique Sportwagon devised by Chuck Miller, which didn’t have a functional opening hatch. John Greenwood reckoned he could create an improved version and converted the first example, by cutting off the roof of his girlfriend Sharon Vaden’s C3. Kits were later offered through Eckler’s and ACI (American Custom Industries) and it’s thought less than 14 were produced. Stuart’s 1975 C3 Sportwagon, was a New York barn find discovered in 2018. It had not been started for 20 years and required a little recommissioning and a new fuel tank. The C3 Sportwagon represents a 2+2 with a bench seat in the rear. Another example is on display in the GM Museum in Holland. A rare and fascinating aspect of Corvette folklore!

Ray Yorkshire took Best C6 award with his 2007 Euro Spec 3LT Coupe, which was registered new in Venice, Italy. Ray purchased the car from Milan in 2015 and has since clocked up plenty of miles on continental trips. These include three to Italy, one to Hungary, four to Germany, five to Holland and four to Belgium. Best timed run at Santa Pod ¼ mile is 12.57 secs @ 114mph , while a temporary Nitros set-up run at Dunsfold Top Gear track, Surrey, resulted in a smokin’11.87secs @ 127mph! Slightly more up to date was Barry Smith’s 2018 Carbon 65 model, produced to celebrate 65 years of the Corvette.  It’s finished in the rather unusual colour of Ceramic Matrix grey, that is a metallic, which viewed in certain lighting conditions, can appear blue. It’s one of only 650 produced, of which 125 were for export to Europe and this example is reputedly the sole example to be sold new in the UK.

Corvette C5, C6 and C7 models definitely seem on the increase, with a good number of examples on display. It has to be said, that the Chevrolet colour chart for exterior paint colours is mighty impressive, with some fabulous bright metallics. Whatever your particular favourite generation of Corvette, whether totally stock original, modified or limited edition, there was certainly plenty to fuel your enthusiasm at the Nationals.