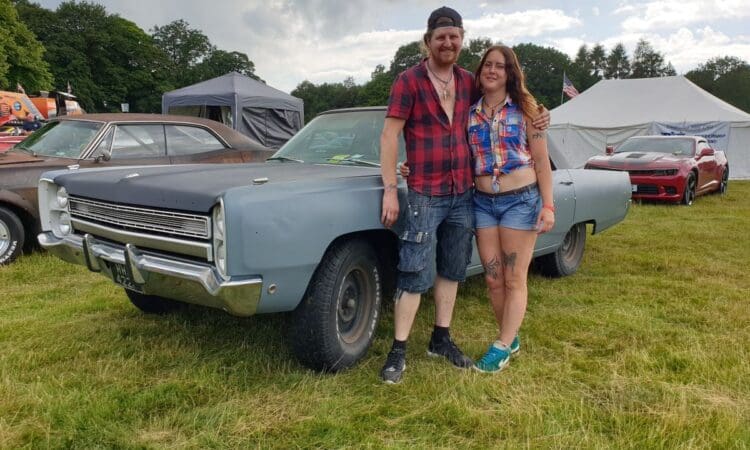 This year’s Stars and Stripes show proved, as many had suspected, that the desperation to get out and do normal things overruled everything else… even downpours of biblical proportions that would normally see punters staying away in droves. And we don’t just mean show cars (the showfield looked as full as usual,) but also the public coming into see visit the show, who also came en masse.

Once one had gotten over the shock of not seeing Noah and his ark on the show field, there were plenty of interesting and unusual cars on display. Setting up early on Friday lunchtime, were two gentlemen from Liverpool who’d bought along a very enticing 1941 Buick Special that very much looked as if it had seen military service during the war (from the colour, although it wasn’t the usual drab matt green) and then intermittent use after the war, until being laid up in the Sixties. We’re always going on about originality on these pages, but in reality, it’s rare to see a car as original as this, right down to the interior, Fireball Straight Eight motor and service stickers on the door from 1956. The owners said they were going to leave the car as it was, just fettle it mechanically, which was nice to hear.

If originality was your thing – and from a completely different era – then Richard Bromige’s 1979 GMC Van Dura Dayvan was a pretty breath-taking example to behold. Imported by Oldcott Motors (www.oldcottmotors.co.uk) it still wore its original brown Drayon interior and metallic brown with gold accents paint, looking as if it had just rolled off of a Seventies movie set. Converted by the very Seventies-sounding ‘Santana’ one half expected to see Cheech or Chong lounging in the back puffing on a big reefer! At the other end of the spectrum was a new Challenger (despite looking very hi-po, it was in actual fact a six-cylinder model,) being offered by Ace American Autos (www.aceamericanautos.co.uk) who had a number of cars on display on their stand, including a very tasty 1963 Chevrolet pillared coupe with a 409 motor, 4-speed manual ’box, American Torq Thrust II wheels and … air bags!

For fans of traditional Seventies custom cars was a ’67 Camaro SS called Silhouette that was a star feature in Hot Car magazine back in 1978. It has to be said that it looked in remarkable condition, so whether it’s been kept in a ventilated bubble for the last 43 years, or someone’s done some remarkably sympathetic restoration work is unclear, as there was no one with the car to ask when we saw it… Apparently, it had been imported in 1975 by Mick Cooke, who bare-metalled it, used 5 gallons of clear lacquer and added the murals in preparation for the first Manchester Hot Rod and Custom Show… a piece of rolling history, if ever there was on!

Another eye-catching rod belonged to Mark Nicholson who’s 1970 Boss 302 Mustang was a hot contender in the 2016 Car of the Year competition. Mark it seems has moved onto hotrods now and brought along his 1929 DeSoto Model K fitted with a Seventies 318 Dodge motor, although it has in the past had a Pinto engine and was believed to have been in the Manchester area for many years previously.

There were plenty of trade stalls and auto jumblers, even a gentleman from Staffordshire called Mark Wowra, whose business specialises in antique telephones and Zenith Trans-Oceanic radios (these American transistor radios from the Sixties and Seventies were the Cadillac of radios at the time). Interested in cars for sale? Well, there were a few on the show field, but there were several dealers onsite too, including Stockport-based Parts USA (www.partsusa.co.uk /Tel. 0161 872 7744) who had a number of the Chevrolet-sponsored vehicles from Manchester United players, including Corvettes and Camaros. Also present were 51st State and Ace American Autos. Despite the rain, the sun did actually come out to play, although on both days, about an hour before the show closed – as usual it was good to see so many different eras and types of vehicle, next year however, sunny weather has been booked, we guarantee!