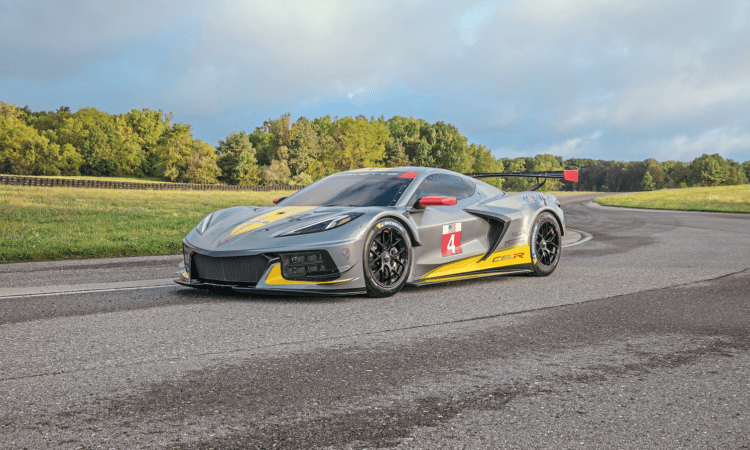 The C8.R will be Chevrolet’s first mid-engine race car to compete in IMSA’s GTLM class and represents the first clean sheet race car design since the C5.R debuted back in 1999. It will make its racing debut at Rolex 24 at Daytona on January 25, 2020. Based on the regular eighth-generation mid-engine Corvette Stingray, the C8.R has a high level of commonality with its street-going counterpart.

Some unique features of the C8.R include a single, centrally mounted radiator in the front luggage compartment area and ultra-bright racing headlights located where the radiators are incorporated on the street C8.

In order to comply with IMSA engine displacement rules, the C8.R will feature a 5.5-litre, naturally aspirated V8 engine, producing 500hp and 480ft-lb of torque. A new compact Xtrac six-speed sequential gearbox was developed in order to provide room at the rear of the C8.R to package a race car specific diffuser.

“We have looked forward to racing a production-based mid-engine Corvette for a long time,” said Jim Campbell, Chevrolet US vice-president of Performance and Motorsports. “The debut of the C8.R is the result of immense collaboration between GM Engineering, Propulsion, Design and the Corvette Racing team. As Corvette Racing enters its third decade of competition, we’re excited to begin the next chapter.”

The C8.R utilises a production 2020 Stingray chassis structure produced in the Bowling Green assembly plant. The chassis has been modified to meet race series requirements and is both lighter and significantly stiffer than its predecessor.

Sporting unique silver and yellow livery, the C8.R will make its official race debut at the 2020 Rolex 24 Hours of Daytona inJanuary, though enthusiasts got a glimpse of the car in action during a parade lap just prior to the 22nd annual Petit Le Mans race at Road Atlanta (October 9-12).