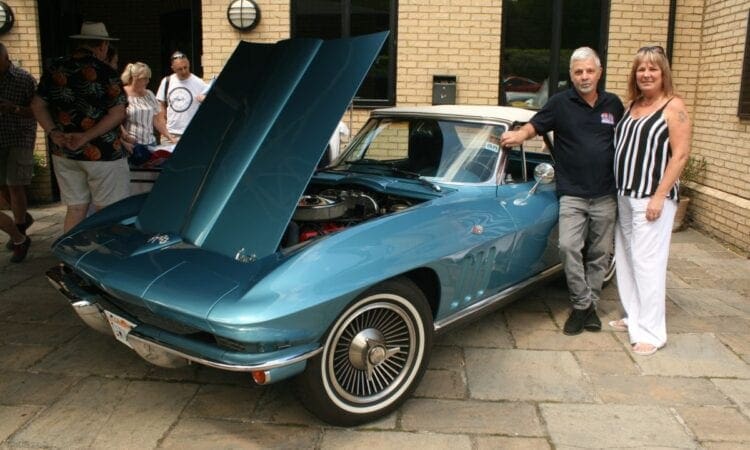 In the absence of any car shows this year, we look back at Paul Bussey’s report from the Corvette Club UK’s show last year…

The CCCUK (Classic Corvette Club UK) once again returned to The Sharnbrook Hotel to enjoy not only the 2019 Corvette Nationals, but also to celebrate the 40th Anniversary of the Club itself. This year’s Nationals was co-ordinated by Mike Lacey, Ross Thornhill and Colin Morton, and the layout was pretty much the same as usual with plenty of cars parked in the top field and dotted all around the front of the hotel. This meant that individual generations couldn’t all be parked together, but that’s a small price to pay for being able to hold your annual event at a hotel owned by a most enthusiastic fellow ‘petrol head’, onsite overnight accommodation for long-distance attendees and a function suite − all sorted then!

“Corvettes started arriving from around mid-afternoon on Friday, to make the most of the weekend,” says Ross Thornhill. “We had a Club committee meeting on Saturday which lasted a couple of hours as there was plenty to discuss, some good points raised and, most importantly, nearly all the various positions filled. Now we have a really strong committee line-up and it’s almost certain that the Nationals will be held at The Sharnbrook Hotel again in 2020. Saturday’s road run was over to Santa Pod, where many members entered their cars in the RWYB meet and a fun time was enjoyed by all. Saturday evening saw us celebrate at The Sharnbrook with a gala dinner and live entertainment from Marshall King.”

Sunday saw the traditional Show ’n’ Shine, with a great many ’Vette Heads furiously polishing their pride and joy in readiness for judging. There was also a small contingent of visiting American cars which parked in the perimeter area of the top field, plus and around 12 cars from the Mustang Owners’ Club UK. In essence, it was an extremely friendly event; small enough to enjoy a most convivial atmosphere, with plenty of Corvettes to admire, the earliest being Mike Lacey’s 1956 model, right up to the state-of- the-art current production car courtesy of Nigel Dobbie’s 2019 C7 ZR1. Nigel was almost certainly eligible for the furthest distance travelled award as he brought his car over from the US especially to attend the Nationals and several more shows in the UK and Europe this summer − top man! There’s nearly always Corvettes travelling from Belgium including CCCUK stalwart photographer Jonny Bens.

Mike Lacey brought along several of his Corvettes. His faithful 1963 Split-Window Sting Ray and, relatively new in his ownership, his 1956 C1. Mike has completed plenty of work on his 1963 car, most recently changing the colour of the interior to better complement that fabulous exterior paintwork Tango Mango, aka Toxic Orange: “I’ve also fitted some custom exhaust sidepipes, utilising the existing side mouldings, with the side covers being hand made by myself,” says Mike. “My 1956 Corvette C1, is the first of the V8 engine cars. Mine is fitted with a 225bhp version with dual carburettors and a three-speed manual gearbox. It came with the full option of hard and soft tops and is one of only 147 ever built in this colour scheme with a beige interior, the colour being Cascade Green with Beige coves. It was a previous NCRS Top Flight car in the USA and I imported it from Ohio in December 2018.”

CCCUK Treasurer Colin Morton arrived in his 2007 Indy 500 Pace Car finished in the very eye-catching colour of Atomic Orange. Colin imported the car himself from New York State around four years ago. Originally hailing from Denmark, growing up in Canada and now residing in North Lincolnshire, Leif Hansen was displaying his 1962 Corvette which was originally a Canadian registered car: “My Corvette was reconditioned by Emilio Contino who is quite well known in Ontario,” says Leif. “I purchased it about three years ago and it has proved to be a wonderful car, and I couldn’t have asked for anything better; it runs like a dream. For us slightly older owners, the only thing missing is power steering. It has a hot cam with plenty of horsepower, a great carburettor set-up, resulting in around 400bhp, which moves it along nicely.”

Tania Cooper’s 2003 C5 convertible 50th Anniversary model has been in her ownership for around 1½ years now, with her having previously run a C5 coupe for a good many years. “We had some great fun on the drag strip at Santa Pod yesterday, loving every single minute of it, “enthused Tania. “I’m definitely living the dream, driving my Corvette convertible.”

One of the most admired cars at the Corvette Nationals for a good many years now is Daren Parish’s 1958 C1, heavily modified by Custom Exotics and more recently being the subject of several more upgrades, notably with a new Brembo brake set-up and power steering.  Daren says with the LS1 engine, the car gets up and gallops really quick, so you need a big brake set-up in order to stop more effectively.

Daren also had his 1963 Split Window Sting Ray on display. It was originally painted blue, but is now finished in fabulous gleaming Jet Black, with Candy Apple Red bonnet bulge and a red interior. The car was pulled apart at Custom Exotics and rebuilt over a period of 14 months. “Even the underside of the car is every bit as shiny as the top,” points out Daren. “It still runs the original 327cu in engine and gearbox. That’s been blinged up, and of course there’s plenty of upgrades to the running gear to make it drive and handle that much better.”

Another hugely admired Corvette at the Nationals was a 2019 C7 ZR1 owned by Florida resident Nigel Dobbie. “I ordered the car from a dealer in New York in January 2019 which was built for me in six weeks,” he explains. “The car was then trailered from the factory, which is across the street from the Corvette Museum and then parked on Corvette Boulevard. I arrived at the Museum, had a guided VIP tour and later in the day took delivery of my ZR1, which is known as Museum Delivery and I have an engraved plaque on the dashboard commemorating the occasion.” Another excellent Nationals weekend mustering a fine variety of Corvettes to enthuse all generations − it sure was ’Vette Heaven’!