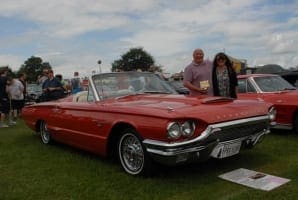 The 5th heat of the Footman James Car of the Year competition took place at the Stars and Stripes Show, Tatton Park, Cheshire. But which car scooped the trophy….?

With so many immaculate and original cars on hand, it was always going to be a challenge to choose a car for the heat of the FJ Car of the Year competition. In the end the car chosen was one which my look familiar to Classic American readers.
Stephan Longworth’s 1964 Ford Thunderbird actually appeared in our June 2013/CA266 issue if you think you’ve seen it before (or in case you want to read up on it!)

Just to recap, has under 15k miles on the clock and represents probably the nicest Thunderbird of this era in the UK, in immaculate original condition. It’s also a very heavily optioned car, with ‘Powerlift’ windows, power-seats, a rare reclining passenger seat option with a headrest, tinted glass, Kelsey Hayes wire wheels, leather upholstery, an AM/FM radio, a tilt steering wheel and of course power-steering and -brakes as standard. There was also the Sports Roadster option of the glass-fibre tonneau cover for the rear seats, dropped by the factory for 1964 but installed on this car as a dealer option.

We look forward to inviting Stephan and his magnificent T-bird onto the Classic American stand at the Classic Motor Show in November, so make sure you swing by to see this and all the other magnificent car of the year finalists.