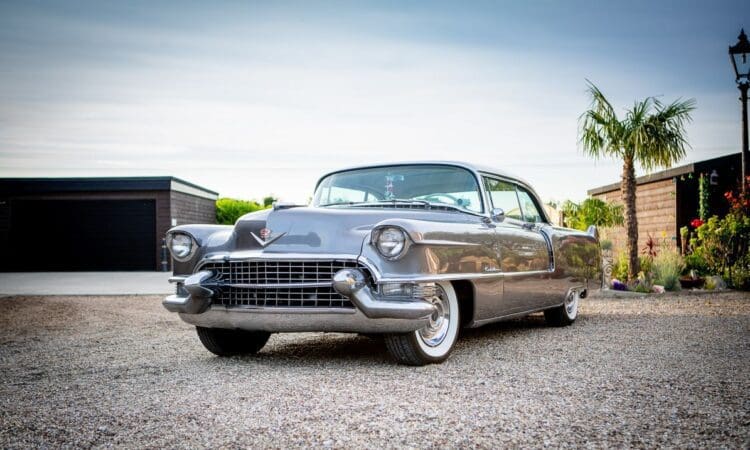 Slap-bang in the middle of July’s sweltering heatwave, Historics hosted its largest sale in its

ten-year history which was held at the picturesque 100-acre site at Windsorview Lakes, Berkshire. The total entry offered in hall, on the phone and online was 201. Known for representing the wide breadth of the classic and collector car market, Historics opened its consignment window still wider here with a selection of classic motorcycles, a duo of notable classics boats – including a Riva Junior motorboat – and even a brace of Shepherds’ Huts looking entirely at home in the classic surroundings.

A total of 50 classic car marques spanning ten decades were represented, the earliest

consignment being an eye-catching 1910 Cadillac Model 30 Roadster, resplendent with

its brass fixtures and fittings which sold for £33,600. The three viewing days prior to auction once again proved popular, with some 670 people attending from the Wednesday to Friday, whilst on sale day the auction hall was well attended throughout with over 900 bidders and guests. Online engagement was similarly buoyant, with some 700 bidder registrations from 27 countries. 143 of the 201 entries were sold, returning a gross sale of £3,328 million and representing a sale rate of 71%. 62 lots sold to online bidders, accounting for 29% of sold consignments.

American classics were well represented, including an imposing 1961 Chevrolet Corvette C1 which sold over-estimate for £81,760. Likewise, a fastidiously preserved 1957 Ford Thunderbird that passed on to a new owner for £33,320. Someone got a real bargain with a cool silver 1955 Cadillac Coupe De Ville for £21, 508 that had an estimate of £20- £27,000. The zebra-skin door cards were an acquired taste, but would be an easy fix for anyone wishing to return the Caddy to original. Mustangs are a perennial favourite and someone bagged another bargain with a 1966 Convertible that hammered for £26,036.