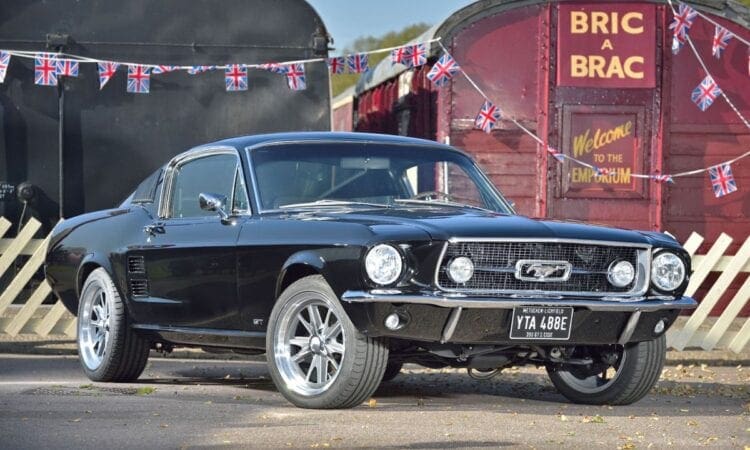 At the start of the COVID-19 lockdown in March, many were quick to predict the collapse of the classic car market. The cancellation of hundreds of events, the restrictions to road use and the difficulties in inspecting and transporting cars were all blamed in advance for a downturn in values. To most people’s surprise, just the opposite seems to have happened. In the UK, there was little more than a pause for breath in mid-March before the market surged back to life.  One online classic car auctioneer, TheMarket.co.uk, saw more business than ever before.

‘It’s been mad, in a good way,’ said TheMarket’s Tristan Judge. ‘Our website’s viewing figures have trebled and new consignments have gone through the roof. We’ve seen sales shoot up to around £900,000 a month, with a 90% sale rate.’ His reasoning behind this? ‘I think we’re seeing a lot of financially secure people with time on their hands for once, finding a chance to research what they want and hit the “bid” button.’ Traditional auctioneers have seen a similar rapid recovery after the initial panic, at least those who were agile enough to respond have done.

‘Those that have moved entirely online have found bidder activity to be strong,’ said Richard Lewis of the Auction Technology Group, which runs thesaleroom.com and i-bidder.com. ‘Auction houses are also providing more generous terms on storage – usually offering to hold on to an item purchased until it can be collected safely later – and have found ways to provide delivery services that respect social distancing measures. A number of them have even been providing valuations via video link.’

The evidence started to appear when specialist auction houses got back to business during April and May. In April’s sales, the results were very similar to the kind of figures we’d have expected before the coronavirus – H&H Auctions sold a worrying 50% of lots at their first event as lockdown began, but improved to a conventional 70% sales rate at their second event in late April, clearing £600,000 as nine cars sailed past their top estimate.

At that same April sale, H&H hammered down a 1967 Ford Mustang 390 GT at £61,875. In their sale in late May, Silverstone Auction shifted an amazing 86% of cars with strong prices almost everywhere – nearly £40,000 seemed plenty for a twenty year-old Dodge Viper and £20,250 was a great result for a 1967 Pontiac Parisienne four-door hard top, albeit a vanishingly rare RHD example sold new in the UK.

It’s not just auctioneers who have been busy, but traditional dealers too. James Szkiler of the Classic and Sportscar Centre in Malton, North Yorkshire, is typical. ‘There’s no doubt the market is buoyant right now,’ he said. ‘We’ve sold 46 cars between the 1st of April and the third week of May!’ We’ve heard similar examples from the USA. Daniel Schmitt & Co of St Louis, Missouri reported ‘another incredible week of business’ as we went to press, with Mr Schmitt suggesting the collector car marker overall remains ‘incredibly strong’.

One factor that unites both sides of the Atlantic is the crash in the world oil price, bringing petrol down to below £1 per litre here, with the lowest price in the UK in late May hitting 95.7p. This is clearly welcome to owners of thirstier classics, and therefore removes some of the fear from running many American vehicles, in the short term at least. But the market has been strong across all types and ages of classic, and seemed set for a mini-boom before fuel costs dropped.

On the other side of the pond, the well-known sales and auction site Bringatrailer.com saw its busiest ever days in April and expected to break those records again. BAT’s Randy Nonnenberg spoke to Bloomberg.com, saying ‘This is not, “Oh my goodness, the classic car market is going to stop and the bottom is falling out.”’  Jacqueline Glassman, Senior VP of Operations for Proxibid, an American online auction host, told us of a similarly encouraging trend.

“Bidder activity on Proxibid has been robust throughout the period since March,’ she said. ‘Page views of collector cars have gone up 43% compared with the same period in 2019, despite fewer total lots being available as some auctions have been postponed during COVID-19. There has also been a 24% increase in new user registrations in the collector car category. So we’re seeing that if there are collector cars online, the bidders will follow.”

With the big-ticket US auctions all being delayed or rescheduled, it’s likely that those with money burning a hole in their pockets have looked to smaller online sellers or private transactions. David Gooding, founder & president of Gooding & Co spoke of what he called ‘pent-up demand’. ‘For those of us who love cars, who truly love cars, this has really created a yearning for all of us to go back to our roots. We are looking forward to having the spare time and freedom to go out and drive and hang with our car buddies. It’s something we are really looking forward to doing, and for a lot of us, a car is a big part of that.’

The next question, then, is how long all this can last. Are we seeing a new reality in the classic car market, as well as in how we have to live our lives? Will this increased demand stay high? Against this rosier view is the forecast of economic hardship that lies in wait. Tristan Judge of TheMarket.co.uk says his view is of tougher times to come. ‘Everyone says there’s a big recession on the way, and if we’re coping with that as the car market tries to get back to normal, then the downturn we’ve seen in the last year or two could steepen.’

But there are arguments against pessimism. Fuel prices are likely to remain low for a considerable time, as demand from air travel could take three years to return to pre-COVID levels, according to industry estimates. And although large car shows may also be some way off, most classic owners don’t own a car solely to attend these events, instead seeing a classic as something they can enjoy by themselves or with their immediate family – or indeed restore at home. Finally, many of those new to classic cars have decided take the plunge because ‘you only live once’…something that the COVID crisis has forced us all to consider.