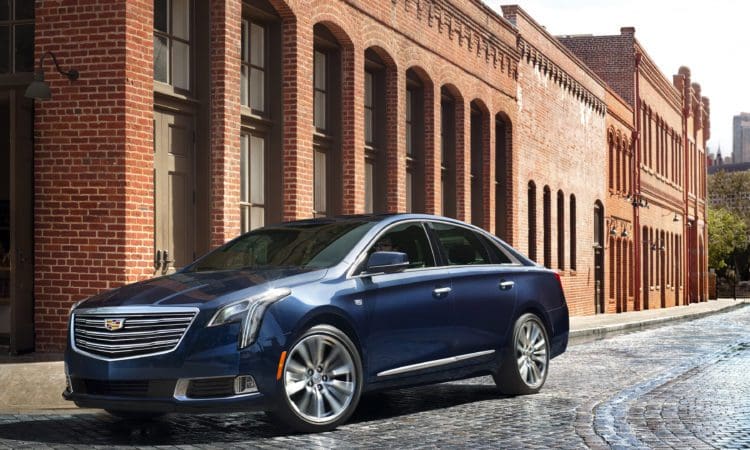 Since 1902, Cadillac has come to define the quintessential luxury American car. Once billed as “Standard of the World,” owning a Cadillac symbolized status and success. And while the brand fell on tough times during the Eighties, it has been been quietly enjoying a resurgence. Today’s crop of cars and SUVs boast truly world-class performance and handling, premium appointments—technological innovations through features such as Super Cruise and Cadillac User Experience connectivity— plus edgy styling that remains distinctive amid today’s ‘genericar’ vehicle fleet. Here’s a look at what’s currently on offer from General Motors’ top tier brand.

The smallest member of Cadillac’s current passenger family, the ATS is a front-engine, rear-drive sedan and coupe aimed at the likes of BMW’s 3/4-Series and Lexus IS. It comes standard with a 2.0-litre turbocharged four-cylinder engine rated at 272 bhp and 295 lb ft of torque that can be teamed with either a six-speed manual, or paddle-shifted eight-speed automatic transmission on the ATS Turbo and Turbo Luxury versions. Standard Brembo front brakes as well as a performance tuned ZF steering assembly are designed to provide sharp on-road reflexes and superior stopping.

A high performance ATS-V variant comes with a twin-turbo 464bhp 3.6-litre V6, teamed with a six-speed manual gearbox or eight-speed paddle shift automatic. This enables it to accelerate from 0-60 mph in just 3.8 seconds and top 189 mph. A track tuned performance suspension with Magnetic Ride Control and driver selectable performance modes, plus a standard Brembo brake system ensure the ATS-V is equally at home on the road or race track.

Larger brother to the ATS; is the mid-size CTS which is offered in standard, Premium, Luxury and V-Sport iterations. Drivetrain choices are similar, with a 2.0-litre turbo four cylinder as the base engine and a 3.6-litre V6 offered as an option. Both engines are teamed exclusively with an eight-speed paddle shifted automatic transmission. The CTS V-Sport, gets a twin-turbocharged V6 rated at 420bhp and 430 lb ft of torque, also teamed with an eight-speed (albeit higher capacity) paddle shifted slushbox.

Given that the blown V6 delivers a maximum torque spread from 2500 to 5500 rpm, the CTS V-Sport feels very quick off the line with old-style grunt reminiscent of traditional big-cube Detroit V8s. As one of the lighter cars in its segment, the CTS is also rather agile, especially in V-Sport form which includes a sport-tuned suspension with Magnetic Ride Control, faster steering, race-inspired Brembo brakes, wider rear wheels and tyres, plus a driver-selectable track mode and electronic limited slip rear differential.

Even the standard CTS is no slouch when it comes to cornering thanks to a good power to weight ratio and finely tuned chassis and suspension that’s been honed on the infamous Nurburgring. Available all-wheel drive also enhances the car’s driving prowess in different climatic conditions. Like the ATS, the CTS features a full ensemble of luxury and convenience features, including Cadillac’s updated CUE (first introduced on this model,) with mobile app functions and available 4G LTE WiFi.

Spiritual successor to the long running DTS/DeVille, this large and front-drive only offering among Cadillac’s passenger cars received an extensive makeover for the 2018 model year. This included an updated chassis; exterior styling changes with new front and rear fascias that mirror the CT6, plus updated interior trim and CUE infotainment system.

The XTS is offered in base, Luxury, Luxury Premium, Platinum and Platinum V-Sport versions, with motivation coming via GM’s proven 3.6-litre V6 teamed with a six-speed automatic transmission that features tap controls. The base engine is a normally aspirated 304bhp unit, while an optional twin-turbocharged version delivers 410bhp and 369bhp—making the XTS one of the most powerful cars in its class. Other key features include chassis refinements designed to improve ride comfort, revised 19 and 20-inch tyres, an optional all-wheel drive system with a Haldex coupling that’s able to split torque between the front and rear wheels, plus available Magnetic Ride Control and Air Leveling suspension to optimize both handling and ride.

The four-cylinder cars are available in rear-wheel drive configuration, while the V6 models are AWD only. Technological advances such as an optional Active Chassis Package that includes Magnetic Ride Control, Active Rear Steer and 20-inch wheels and tyres are designed to optimize handling and steering input. A massive 10.2-inch screen for the CUE infortainment system, quadzone climate control and optional adjustable rear seats (with 3.3-inches of travel) on Platinum choices cement the CT6’s status as Cadillac’s premier passenger car.

Alongside the regular CTS, Cadillac also offers a plug-in hybrid version that uses an 18.4 kWh lithium-ion battery system located in the trunk. A two-motor electric variable transmission sends power to the wheels, while the electric powertrain is augmented by a 2.0-litre; turbocharged four-cylinder petrol engine. Regenerative braking, dubbed ‘Regen On Demand’ is designed to not only conserve energy but improve driving feel under deceleration (delivering a sensation a bit like engine braking when using a manual gearbox).

At the other end of the spectrum, Cadillac has also launched a V-Sport derivative of the CT6 for 2019. This gets its motivation from a new twin-turbocharged 4.2-litre Cadillac V8 rated at a whopping 550bhp and 627 lb ft of torque. Teamed with a new 10-speed automatic, sport tuned chassis and suspension, plus a Brembo brake package designed specifically for this car, the CT6 V-Sport represents the current pinnacle of both Cadillac engineering and performance.

Rated at 237 bhp and 258-lb-ft of torque, the four-banger is teamed with a nine-speed automatic transmission that incorporates what Cadillac calls an “intuitive shifting sequence.” Interesting features include the brand’s first electro-hydraulic braking system, which along with the powertrain is designed to maximize fuel economy by reducing parasitic loss. An optional Active Sport suspension with electronically controlled damping, is aimed at improving vehicle control and dynamic capability, while the optional twin-clutch all-wheel drive system allows the driver to decouple the rear wheels to improve efficiency and reduce drivetrain friction. Like other current models in the lineup, the XT4 features Cadillac’s User Experience (CUE) interface that leverages cloud and 4G wireless technology to deliver a range of infotainment features via touch screen or rotary controller activation.

A step up in size from the XT4, the XT5 was first launched in mid-2016 as a 2017 model and has since zoomed to become one of the best-selling vehicles in the U.S. luxury marketplace. Aimed at the likes of the Audi Q5 and Mercedes-Benz GLE, the XT5 is larger, yet lighter than both with fairly good space efficiency inside and clever features such as moveable fore and aft rear seat.

It’s also billed as a connectivity-friendly vehicle via the CUE infotainment system, onboard 4G LTE WiFi capability; as well as number of USB ports and ample storage for both smartphones and tablets. The cabin also features Cadillac’s signature cut and sewn wrapped panels and an emphasis on simplicity, despite the technological features contained within it.

On the mechanical side, the XT5 features a 3.6-litre V6 with variable valve timing, plus GM’s Active Fuel Management (cylinder deactivation) and Stop-Start technology, all in an effort to conserve fuel. Rated at 310 horsepower and 271 lb ft of torque, it’s teamed with an eight-speed automatic that incorporates Electronic Precision Shift technology (eliminating the need for a conventional shifter). XT5s are offered in either front-wheel drive or all-wheel drive—the latter using a twin-clutch system that allows the driver to decouple the rear wheels to boost fuel efficiency when needed. This setup also enables up to 100 percent of torque to be transmitted to the front or rear wheels (an electronic rear diff also allows the back tires to each receive a maximum amount of torque if required). The XT5, along with its newer, smaller XT4 sibling is seen as key to Cadillac’s current and future sales strategy.

Cadillac EscaladeLast but not least is the imposing Escalade. Still the vehicle of choice among certain music artists, athletes and celebrities, the big beast received a few updates for 2018 including a new Maple Sugar interior, revised colour options and a 10-speed automatic transmission.

Power for this body-on-frame behemoth still comes courtesy of a 6.2-litre V8 that cranks out 420bhp and 460 lb ft of torque. Teamed with the new 10-speed automatic slushbox, the 5800 lb Escalade can reach 60 mph from rest in less than six seconds (5.98—a second faster than last year’s version) while thanks to a wider gear spread, it also boasts a five percent improvement in fuel economy (23 mpg U.S. in 2WD form).

Handling and braking prowess are enhanced through a third generation Magnetic Ride Control suspension, with electronic damping and monster six-piston Brembo braking system with massive 13-inch Duralife extended use rotors. Unlike other SUVs in the Cadillac lineup, the Escalade relies on a part-time 4WD system with an automatic mode that allows the driver to let the system engage 4WD High or Low Range depending on road/trail conditions. Traction is further aided by an automatic locking rear differential.

Because of its traditional body-on frame design, powerful V8 and rugged suspension, the Escalade can tow up to 8,300 lbs, almost 1,000 lbs more than its nearest competitor, the Mercedes-Benz GLS550. Other key features of the Escalade, which comes in regular and extended length ESV versions, include a tailored Bose Centrepoint Audio system, with a Blue-Ray DVD feature for the rear seats, Cadillac’s User Experience Infotainment System with Apple CarPlay and Android Auto Integration, onboard 4G LTE WiFi, plus Cadillac’s Rear Camera Mirror System. 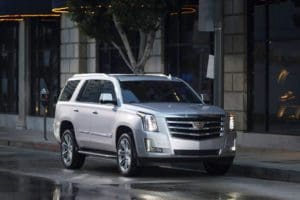