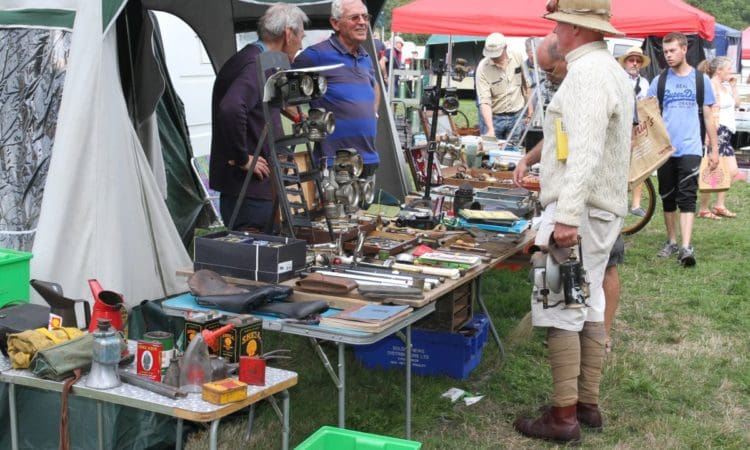 The Beaulieu International Autojumble was first run 51 years ago, back in 1967. In those pre-computer, pre-internet days, it was a great place to buy parts for your old car or motorcycle. Now, we have the all-singing, all-dancing internet where parts can be sourced throughout the world, viewed on-line, bought at the click of a button and delivered to your doorstep in days by white, yellow or brown van-man – soon even by drone. You’d have thought that autojumbles were a dead duck, but no. This year some 34,000 people poured through Beaulieu’s gates to rummage, banter and barter with over 2000 stallholders. I personally get as much enjoyment from people-watching as I do from trying to find a bargain. Folk dress in all manner of quirky garb, from top hats and colourful waistcoats, to pith helmets, goggles and gaiters, to crusty Barbours and oily flat caps. Then there’s the sandwich boarders wanting a lower-spridget cockpin for a 1906 Isotterini Lambrusco. This year there seemed to be hordes of Germans, many sporting splendid over-the-top moustaches, twirled at the ends. I guess the Euro is in their favour. I was on the hunt for a rear-light lens for a friend’s T Bucket hot rod. He’d cracked one of them and, of course, had no idea as to its identity, so he got muggins here on the job. It didn’t take long to find out what it was, but no one seemed to have one. And if they had, it would have been silly money. So I guess a pair of alternatives are on the cards. Then, I headed over to the Automart in the central arena where cars were for sale and immediately honed in on a bright red 1962 Chrysler Newport with an asking price of £25,000. Owner Julian Marsland had driven three and half hours from Devon, so that says a lot. He said, “I’ve owned it for about ten years, but it’s only been in the UK for a year. I lived in Australia for fifteen years but came home. It got too hot. It was originally a California car and then came to Australia. When I bought it, it was as dusty as hell but it had never seen rain. It was very original and still had the plastic covers on the seats. I spent two years going right through it and rebuilding the engine. Over here, I don’t have a garage and I just don’t want to see it going downhill.” There was also a tidy red, two-owners-from-new 1999 V8 Ford Mustang with 95,000 miles on the clock for £12,750, a 1945 “on the button” Willys Jeep for £16,000 and a rather impractical bright yellow Chevy SSR at an optimistic £25,000. Over in the Bonhams’ auction, there was a lot more to get excited about and, as it turned out, some astonishing results. A red and white 1961 Corvette roadster was catalogued as “a project” and carried an estimate of £18,000 to £25,000, but I think I would have described it as “in need of a total nut-and-bolt restoration”. It fetched a staggering £50,600. After restoration costs, the new owner will be in for at least £80,000. I have seen really nice C1’s going for around £50,000 so, to me, it makes no sense. At the other end of the spectrum was a tidy, perfectly usable bronze and white 1967 AMC Rambler American Rogue with vinyl hardtop and two-tone interior. It carried a desirable 4.7 litre V8 with manual gearbox and, although being sold without a reserve, had a not- unreasonable estimate of £8,000 to £12,000. I nearly wept into my beer when I found out that it was hammered down at just £2070 − an absolute bargain for some lucky soul. I was quite taken with a lovely 1948 Chevy Fleetmaster “Woodie” station wagon which sold for £29,900, a tad under its lower estimate. Another that caught my eye was a luxurious grand old lady in, shall we say, “shabby chic” condition – namely, a 1926 Packard Eight Series 243 Landaulet with coachwork by LeBaron. The poor old chauffeur sat out in the cold on his durable leather seats while his Lords and Masters sat on their luxurious fabric seats in the warm and dry. When they needed to speak to the driver, they bellowed down a speaking tube. This superbly built car found a new owner at £33,350 − again, bottom estimate. A stylish 1939 Chevy Master Deluxe Six Coupe with a guide price of £20-25K looked great value at £13,350. A sporty 1918 Stutz Bearcat roadster with VSCC race-winning pedigree had an estimate of £150-£180K, but was a non-seller. Plus, there were several Ford Model Ts and Model As that all sold within range. Out in the fields, there was plenty of Americana to be discovered, from film posters and old photos to model cars and motorbikes, enamel signs, car badges and old number plates, to books, magazines, brochures and retro clothing. Beaulieu Events Manager, Judith Maddox, said: “Glorious sunshine across the weekend gave an upbeat feel, and spirits were high at this year’s event. Trading was so strong that nobody wanted to stop selling on the Saturday.” And besides, it’s way more fun than sitting in front of a computer screen on your own.