During 2018 we’ll be thinking of the significant half-century anniversaries to be celebrated in the muscle car hobby. Can it really be 50 years since the Road Runner appeared, ’68-70 Charger and this month’s column filler, the second-generation Oldsmobile 442? Oldsmobile raised the bar for 1968 and continued with brute power for their ’69 models, as the luxury cruisers associated with Olds gave way to a new breed of exciting designs with performance to match. 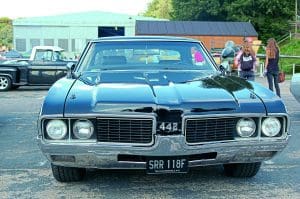 At last the 442 (which supposedly stood for a combination of four-barrel carburettor, four-speed manual transmission – despite the availability of automatic transmissions – and dual exhausts) became a standalone model in itself, lasting through to 1971 when it reverted back to largely a performance option.
The 442 package that appeared in 1964 consisted of a 330cu in V8 police engine, along with the four-barrel carburettor and a twin exhaust including a dual snorkel air cleaner along with heavy-duty suspension and a rear stabiliser bar. Later models from 1966 would end up with the infamous 400cu in V8. This package could be had on the F-85 and Cutlass, but not on station wagons. The buying public were totally confused and the marketing at the time woeful, so only 2999 were produced. 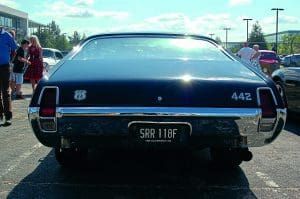 The ’68 models received all new bodywork and some inspired options – at last the 442 became a genuine contender in the muscle car wars. The 400cu in engine received a new crankshaft and a more progressive camshaft, giving higher torque ratings with a base engine rated at 325bhp. Automatic cars were rated at 350bhp and a W30 option cranked out 360 horses and included air scoops under the front bumper which forced air towards the carburettor, plus a different camshaft grind and modified intake and exhaust components. The new body received unique rear bumpers with exhaust cut-outs and special tips, coil sprung front and rear suspension; all 442 models included front disc-brakes and wider tyres. The car still rode on the A-body mid-size platform, but it now had a shorter 112-inch wheelbase.
For 1968 Oldsmobile went into partnership with George Hurst, the famed transmission builder, and produced 515 Hurst Performance Oldsmobile 442 models, featuring Hurst shifters (of course!) in a neat console and all painted exclusively Peruvian Silver with black stripes and white pin-striping, special badging and a real walnut wood dashboard.
Engine-wise, the heavy-hitting 455cu in V8 rated at 390bhp was standard, with modified W-30 Turbo 400 transmissions.
The Hurst/Olds combination was repeated for 1969, this time painted Cameo White and including Fire Frost Gold stripes, a massive ram air hood scoop, rear pedestal spoiler, 15-inch chrome wheels and new swanky body-coloured door mirrors. The 455cu in V8 had been slightly detuned to 380 horses and only around 914 of these special edition cars were built. In 1969 the 442 was still available in three models: the two-door Sport coupe, Holiday hardtop coupe and a convertible. Not much really changed from the previous year: the ’69s sported a new front grille and hood scoops.
In terms of 442 production numbers 33,607 were built in 1968 and 26,357 in 1969, giving the division a boost and a real performance presence. As a subsidiary of General Motors the Oldsmobile advertising executives had a healthy budget and both ’68 and ’69 models were actively pushed in the motoring press. To describe the ram air system, Olds simply called it ‘funny things under the bumper’; another ad claimed the 442 ‘snarls softly and carries a big stick’. My favourite is ‘the hidden persuader’, conjuring up a mystical ride.
Doctor Oldsmobile in all his madness certainly prescribed these cars for heart-stopping moments… the only problem is that they are infectious and addictive at the same time – surely no doctor should be prescribing things with those characteristics?!