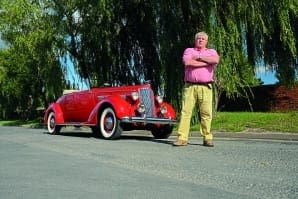 If you already have a fine stable of pre-war Packards, what do you do when a car becomes available that’s said to be the best in America? You act fast, that’s what…

Ask the man who has 3
Bob Mitchell and his prized 1937 Packard
We think this is the fourth time that a Packard belonging to West Yorkshire’s Bob Mitchell has been given a full article in Classic American. There will have been several other appearances too, from show reports to Car of the Year competitions. Indeed, Bob brought this car to our latest COTY display at the NEC show in November after winning at the Rally of the Giants heat at Blenheim Palace. In Birmingham he missed out on the overall win, but received a unique award for ‘Best-Looking Entrant’, an idea he himself may have suggested…
Bob’s abiding fondness for Packards of this era and for American cars in general has kept him coming back, always in the same good-humoured spirit. He’s no obsessive trophy hunter, either; he enjoys working on these finely engineered machines and two of his four pre-war Packards have been painstakingly restored by his own hands. For those of you who don’t recall Bob’s previous appearances, he’s the only Packard-owning trained mechanic who once played professional Rugby League for Huddersfield, or at least the only one we’ve come across.
For this car, a 1937 One Twenty Convertible Coupe, Bob’s hands-on skills were not required. Indeed, it took a couple of different qualities – patience and bravery – to make this one the latest addition to the stable. Bob takes up the story:
“I heard that an American gentleman called James J Ryan was thinking about selling a ’37 Convertible Coupe. It had been restored by a man called Darvin Kuehl who’s recognised as the best Packard restorer in America, and who has actually written a restoration guide for the cars partly based on this individual job – the car’s photo is on the cover of the book.”
It seemed to be the best example you could wish to find. The car won its class at Pebble Beach one year and at an all-Packard show it was voted Best Packard in America. How do you top that? You don’t… you do your best to try and buy it.
Read more in the April issue of Classic American.