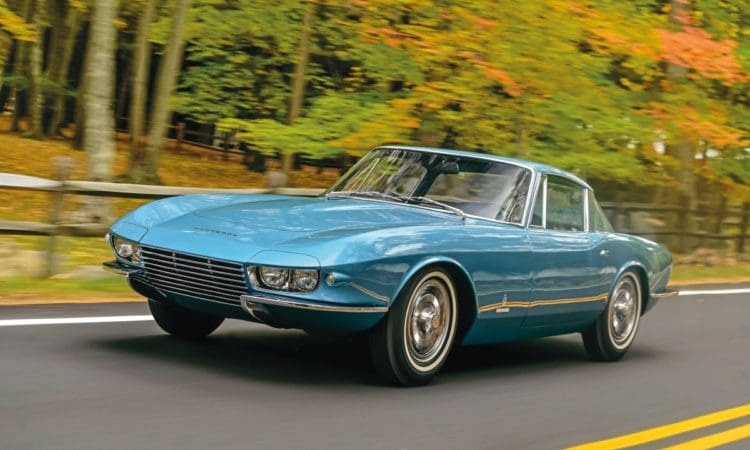 The pages of Classic American have often covered Italian ‘make-overs’ of American automotive legends, specifically the ‘From Here to Obscurity’ pages of Richard Heseltine. Here we take a closer look at one of the more outrageous transformations, the Corvette Rondine.

Michael Schudroff’s Chevy is a car that would let you win almost any bet against your mates. Wanna’ bet this Corvette’s made of steel? Even school kids know that ever since its introduction in 1953, the Corvette’s body has been made out of glassfibre.

Okay, another try. Wanna’ bet this Corvette was built in Italy? Know-it-alls sense the kill. They tell you that the quintessential ‘American sports car’ has always been built in the US, with a 1963 car coming from the GM factory in St Louis, Missouri.

Okay, wanna’ bet that this 1963 Corvette still has its original tyres? 56-year-old tyres? Now, even well-intentioned car friends are going to question your sanity and start to leave you. But you’re just beginning to enjoy yourself.

Wanna’ bet this Corvette was made by Pininfarina? Now the hardcore American car fans are starting to take notice: Apart from a Cadillac model variant in the late Fifties and the US-Italian cooperation on the famed Cadillac Allanté – there are relatively few Italian designs in Detroit steel – or glassfibre, as is the case here. We’d heard enough about this particular enigma to convince us to make our way to the US East Coast to learn more about this intriguing Corvette…

“Welcome to my place. I am the first private owner of this Corvette. It has only done 3106 miles so far and still runs on its original set of tyres.” Making these rather unbelievable statements is the American car collector and classic car dealer Michael Schudroff.

For a little over 10 years now, the energetic 72-year-old has owned his Corvette that is nothing like the rest of his fleet. But even Schudroff knew very little about this unique Chevrolet when he purchased it back in 2008.

In the early Sixties, the Italian design house Pininfarina had already made a name for itself as the creator of wonderful bodies for Italian brands like Ferrari, Lancia and Fiat. Now it was planning to design a show car for the 1963 Paris Auto Show. This was a common way of ‘presenting your business card’ to potential car company clients. Many famous car designs made their way into series production like that.

Dutch-American Tjaarda had previously created some outspoken designs at Ghia, but the Chevrolet Corvette Coupé Speciale Rondine foreshadowed some of his most famous design ideas of later years. Most notably, it was the rear-end treatment with the rear wings gently sloping down to a low flowing deck lid which gave the model its name (Rondine in Italian means swallow’s tail).

In contrast to every other Corvette, the body of this particular one-off was indeed made entirely of steel by Pininfarina’s wonderful Piedmontese craftsmen. Making it out of glassfibre would have necessitated enormous costs for the moulds.

After being shown at the Paris Auto Show in 1963, the Rondine returned to Grugliasco in northern Italy where it stayed on display in the lobby of Pininfarina HQ for the next 45 years until 2008 when it was sold off, together with a number of unique one-offs, at a Barrett-Jackson auction.

Handing over the better part of $1.8 million thus indeed made Michael Schudroff this famous Chevy’s first – and so far only – private owner. This initially didn’t make the owner’s office any more willing to grant Classic American access to his car. Unfortunately, the car would be in storage in the autumn when we intended to visit, we were told. A second call directly to the owner sealed the deal: “Sure, we could do that. Just confirm a day before and we’ll pull it out for you.”

Once we arrived at Carriage House Motor Cars in Greenwich we wee presented with the most perfect car fan’s vision: Nestled in between Rolls-Royces, Aston Martins, Jaguars and Mercedes, the gorgeous teal-coloured beauty awaited, polished and ready to go. Even the rather reserved owner appeared in jeans and windcheater (“I don’t have to be in the pictures”); and meeting him confirmed to us what a special car this most unique of all Chevrolets is.

Schudroff said: “At first, I didn’t even really know what I got myself into. My wife Bebe just liked the colour, no kidding. We always go to the Barrett-Jackson auction in Scottsdale and 2008 was no different. I had read about the Pininfarina sell-off, in itself a rather sad occasion.

“When the Rondine rolled onto the stage, Bebe asked me if I liked that. The teal blue colour was so amazing. There was no minimum bid, so at 600 grand I thought I’d give it a try. Originally, it looked like the car could be mine just a few bids later at a million dollars, but the auctioneer was not having it and created some excitement in the room and we lost it. Eventually, my very last bid at $1.6 million secured it”.

Schudroff himself gets excited reliving the moment he had to part with quite a lot of money: “That was just the beginning”, he said with a wry smile, “that’s when I started reading about this car and what I really owned. At first, I wanted to repaint it as the paint was cracked on a few places, but everybody advised me against it. It is still all original: the 5.3 litre V8, the four-speed manual, the interior – and the paint.

For decades, this is what every visitor at Pininfarina was greeted with, and that’s how it’s going to stay now.” Michael seems to be relieved to have found a reason to keep the car as it was.

But what about the far-fetched claim about the tyres? It’s only when our photographer Greg Jarem pointed his lens at the rubber and yelled: “Those are US Royals. The company hasn’t been called that for over 50 years!” That doesn’t keep Schudroff from sending his assistant Alan to take his million-dollar ‘Vette out on the street to our photo location, while he stayed behind, not even giving it one last look.

Despite its American genes, in between all those gigantic SUVs, our 1.20m-high one-off comes over especially delicate and ‘Italian’, with the large glass expanse adding to the airy feel.

Inside, the Rondine is ‘stock Chevy’, unchanged compared with its ’63 ’Vette origins. Many of the key design elements introduced with the Rondine later showed up in a number of series production vehicles. It’s mainly the rear of the Rondine which inspired Tjaarda for the design of the Fiat 124 Spider.

The large rear window and the B pillars made out of brushed aluminium remind us of an Iso Grifo, while the half-covered ‘eyelids’ up front became a Gandini-hallmark on Iso Lele and Alfa Romeo Montreal. Those front lights begin a line going around the entire car culminating in that coke bottle hip so reminiscent of the 124.

Photographer Greg Jarem admitted the Rondine was incredibly easy to photograph. “This car has not one bad angle, wherever you look”. We find plenty of perfect background in the green belt surrounding Greenwich, and Alan moved our 56-year-old model back and forth with ease.

The 360hp V8 stayed cool, the brakes kept up and everything else worked as it should, too. “Why shouldn’t it?” quipped Alan, “after all, it’s a Corvette, no?”. When we returned to the two-seater and parked it with a crackling exhaust next to a gleaming Rolls-Royce Silver Cloud, we pondered why the Rondine never made it into production. At the same time, we’re kind of glad about it, as this allowed Tjaarda to ‘re-use’ that rear end for the glorious 124 Spider – it seems that all really is well, that ends well.